WATCH: Jeff Sessions Says 'Lock Her Up' At An Event For GOP Teenagers 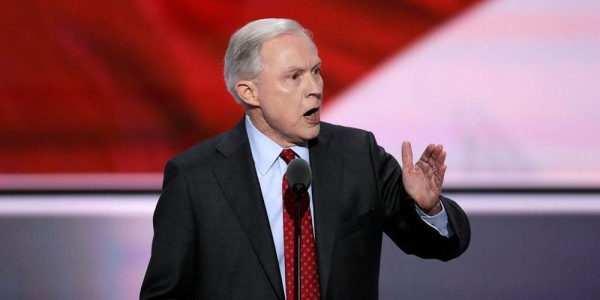 Speaking in front of a crowd of young conservatives, Attorney General Jeff Sessions joined in a chant of “lock her up,” the 2016 Donald Trump campaign mantra urging the government to incarcerate 2016 Democratic Party presidential candidate Hillary Clinton.

“Speaking of officials with security clearance making political statements, it is our understanding now that Attorney General Jeff Sessions just moments ago, talking about just this,” MSNBC’s Hallie Jackson reported.

“Amber, I’ll go to you on this, because your jaw just about hit the floor,” Jackson said to Amber Phillips, Washington Post political reporter.

“This is the nation’s top law enforcement official,” Phillips replied. “This looks like a total pivot in this moment for the attorney general to say, ‘lock her up.'”

“I have to say, this is stunning this is a high school event,” noted Anna Palmer, senior Washington correspondent for Politico. “I mean, this is how pervasive and where the discourse of our country is right now when you have an official like that, and you have teenagers, thinking it is an appropriate thing to yell this about, you know, a former presidential candidate.”