There Is One Perfect Strategy To Prevent Another Donald Trump 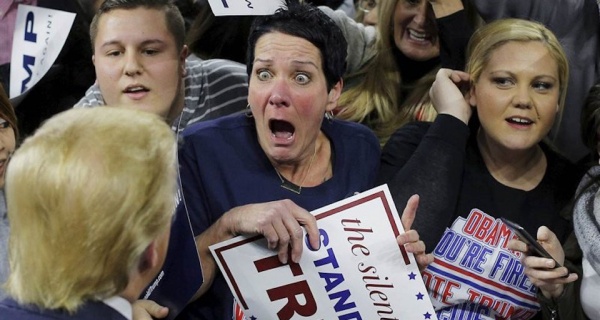 Why did so many working-class voters choose a selfish, thin-skinned, petulant, lying, narcissistic, boastful, megalomaniac for president?

It’s important to know because we need to stop more Trumps in the future.

The answer lies in the interplay between deep-seated racism and stagnant and declining wages. Both must be addressed.

Some white working class men and women were — and still are — receptive to Trump’s bigotry. But what made them receptive? Racism and xenophobia aren’t exactly new to American life. Fears of blacks and immigrants have been with us since the founding of the Republic.

What changed was the economy. Since the 1980s, the wages and economic prospects of the typical American worker have stagnated. Nearly 80 percent now live paycheck to paycheck, and those paychecks have grown less secure.

Meanwhile, all the economy’s gains have gone to the richest ten percent, mostly the top 1 percent. Wealthy individuals and big corporations have, in turn, invested some of those gains into politics.

As a result, big money now calls the shots in Washington – getting subsidies, tax breaks, tax loopholes (even Trump promised to close the “carried interest” loophole yet it remains), and bailouts.

The near meltdown of Wall Street in 2008 caused a recession that cost millions their jobs, homes, and savings. But the Street got bailed out and not a single Wall Street executive went to jail.

In the two years leading up to the 2016 election, I revisited many of the places I had visited when I was labor secretary in the 1990s.

People told me the system was “rigged” against them. A surprising number said they planned to vote either for Bernie Sanders or Donald Trump — the two anti-establishment candidates who promised to “shake up” Washington.

But Trump’s racism and xenophobia focused on the cumulative economic rage on scapegoats that had nothing to do with its causes. It was hardly the first time in history a demagogue has used this playbook.

If America doesn’t respond to the calamity that’s befallen the working class, we will have Trumps as far as the eye can see.

We also need ways to finance these things, such as a carbon tax, a tax on Wall Street trades, and a progressive tax on wealth.

To accomplish all this we have to get big money out of politics.

Even if “Citizens United” isn’t overruled, big money’s influence can be limited with generous public financing of elections, full disclosure of the source of all campaign contributions, and a clampdown on the revolving door between business and government.

Trump isn’t the cause of what’s happened to America. He’s the consequence – the product of years of stagnant wages and big money’s corruption of our democracy combined with a long legacy of racism and bigotry.

If we really want to stop Trump and prevent future Trumps, we will need to address these causes of Trump’s rise.