A List Of Unethical Acts Committed By Scott Pruitt 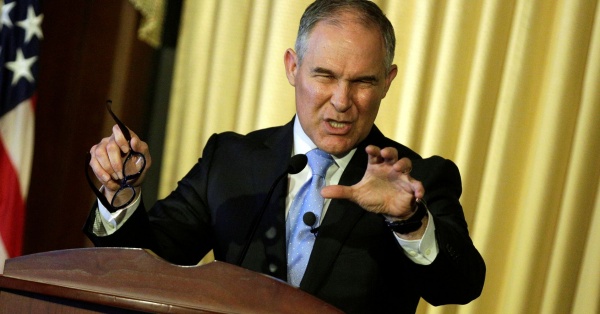 The resignation of EPA chief Scott Pruitt today was a surprise—at least its timing was. Though popular for his pro-industry, anti-regulatory stance among Republican politicians, Pruitt’s many alleged unethical and illegal acts Pruitt caused GOP allies to step away or even outright call for his resignation.

Donald Trump announced Pruitt’s ouster as a resignation and didn’t mention of any of the accusations.

However, the cumulative total of investigations may have taken the toll on a president’s attitude who likes “winners” and promised to “drain the swamp.” Or it may just have been Fox News host Laura Ingraham’s July 3 tweet, “Pruitt is the swamp. Drain it.”

Officially, Pruitt faced 16 investigations, one of which was concluded and found that he broke the law. Democratic congresspeople, government ethics organizations, and congressional committees have asked for additional investigations, filed lawsuits and challenges, and are conducting inquiries in many other issues.

Here are some of the biggest allegations against Pruitt, from newest to oldest by the date of disclosure.

An EPA scheduler was asked to delete and change information about past events on Pruitt’s schedule, potentially in violation of federal law, according to a report in the New York Times on July 5. EPA lawyers made the aide aware that altering the records may be illegal. She told her bosses about the advice, and was fired a few days later. The Times says she was paid for six weeks after her end date, also apparently a federal crime. The EPA said changes were to make the calendar accurate after the fact.

While this matter isn’t tied directly to Pruitt, the actions were allegedly taken by his then-deputy chief of staff Kevin Chmielewski and chief of staff Ryan Jackson. Chmielewski confirmed to the Times that the firing was for refusing to change the calendar.

A former EPA policy administrator, Samantha Dravis, told congressional investigators on July 2 that Pruitt had asked her to help find Pruitt’s wife a job and that the salary should be at least $200,000, the Washington Post reported.

Dravis declined to make at least one call to a political organization Pruitt once headed and she had worked for. Dravis did help Pruitt’s wife find a contract elsewhere, the Post wrote.

She also reportedly agreed that Pruitt had asked subordinates to perform personal work, a violation of rules regarding official conduct. Both Dravis and Jackson, who also testified, allegedly told investigators Pruitt had pressed for first-class tickets or travel by private jet.

Just a few months after Pruitt began the EPA chief, he emailed the head of the Chick-fil-A restaurant chain about a potential business opportunity, according to June 5 reporting by The Washington Post. When Pruitt spoke to someone in the company’s legal department, he said he wanted his wife to obtain a much-coveted franchise from the company. Chick-fil-A confirmed the request to the Post.

Pruitt used secret email addresses instead of official ones

Republicans had criticized a previous Democratic EPA chief, Lisa Jackson, for her use of multiple email addresses. The EPA inspector general said in May that it would review Pruitt’s email usage.

Despite the White House telling Pruitt he couldn’t offer high salaries to two of his closest aides, he used a loophole in the Safe Drinking Water Act to boost their wages, according to an April report by The Atlantic—and kept it from the White House.

Pruitt rented a Washington, D.C. apartment at a steep discount from a lobbyist

One of the biggest scandals for Pruitt was the disclosure that he’d paid $50 a night to rent an apartment in Washington, D.C. that was owned by the wife in a couple who were both lobbyists. Her husband represented clients who had matters in front of the EPA.

While Pruitt and the EPA admitted to most of the facts, they denied any improprieties. And as Pruitt became more entrenched in the scandal, the details raised more ethical questions. For instance, Pruitt only paid for nights he stayed, and his daughter also rented a room at times. The arrangement was supposed to last briefly, but Pruitt was late paying his rent and then overstayed his agreed lease for months until his landlords changed the locks. His security detail at one point broke down a door when they couldn’t reach him by phone, and had to pay to repair it. (The payment was likely improper, too.)

Pruitt spent excessively on travel, including first-class tickets and chartered flights, the Washington Post first reported in February 2018. Many reports followed. The initial report found that Pruitt had spent $90,000 in a single week in July 2018 on travel.

Pruitt flew in luxury class on a non-U.S. airline, even though rules require government employees to fly on U.S. airlines; he spent $40,000 on a trip to Morocco about natural gas exports, a topic not in his office’s purview; his staff looked into a private-jet lease at Pruitt’s request (but abandoned it); and the EPA spent $45,000 for staffers to prepare for an Australian trip that never happened.

Pruitt had a $43,000 soundproofed phone booth installed in his office

Pruitt’s office signed a $25,000 contract in 2017 to have a soundproof booth installed in his office for phone calls, although no previous administrator required such an installation and it’s not common among similar agencies. The bill was later revised to $43,000 to include modifications and repairs required in the office.

This spending was investigated by the Government Accountability Office, which found in April 2018 that Pruitt violated the Antideficiency Act, a law that requires Congress to be informed before the booth was authorized. However, as a cabinet official, punishments are deferred to the president, who issued none.

On taking office, Pruitt beefed up his security detail to a level never before used by an EPA official, and out of scale with other agency heads. Starting in September 2017, media reports discovered that he had 24/7 security, which was unprecedented; that his detail members were redirected from EPA criminal investigations; that the head of his detail allegedly engaged in a form of self-dealing or conflict of interest; that taxpayers paid for security during personal trips to Disneyland and the Rose Bowl; and that staffers who questioned the need for round-the-clock security were fired or reassigned.

Other alleged ethical issues and conflicts of interest

The above cover actions Pruitt is alleged or proven to have taken that have nothing to do with his official job. But investigations and claims into Pruitt about other violations also abound. Here is a partial list:

*Pruitt appeared in a video for the National Cattlemen’s Beef Association, opposing a clean-water rule put into effect under the Obama Administration. The Government Accountability Office (GAO) is investigating.

*Former EPA policy administrator Dravis allegedly drew a salary for parts of three months during which she wasn’t working. The EPA inspector general is investigating.

*Pruitt reportedly hired lobbyists in apparent violation of a Trump order regarding ethics and recent lobbying.

*Pruitt allegedly gave a Superfund job to a banker who had provided loans to Pruitt and whose bank had failed. The staffer, Albert Kelly, resigned abruptly in May 2018.