The Scott Pruitt Mess Continues, Yet He Remains Employed 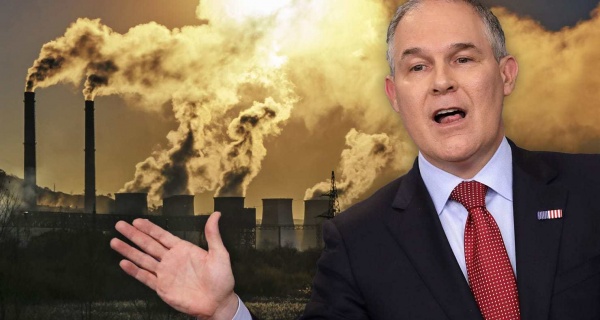 It’s hard to make it through 24 hours without discovering a new layer of corruption in Scott Pruitt’s Environmental Protection Agency. The climate change denier has for months been mired in a dazzling array of scandalous allegations covering everything from exorbitant personal security expenditures, to an insatiable appetite for luxury air travel, to “ratfucking” former employees he feels have wronged him. Because Monday and Tuesday both end in “y,” multiple reports have emerged this week adding detail to Pruitt’s myriad indiscretions.

On Monday, the Washington Post reported that Pruitt, among other examples of unethical behavior, attempted to get his wife a job that paid over $200,000, and that a now-former EPA staffer assisted him in doing so. The Post in June reported that the same staffer helped secure a job for Pruitt’s wife at a conservative group called the Judicial Crisis Network, but it wasn’t known until Monday that he sought such a high salary. Pruitt’s wife did land a gig with the JCN working as a contractor, but made less than $100,000 and left the group earlier this year. The Post also reported in June that Pruitt used his position in an attempt to land his wife a Chick-Fil-A franchise. It didn’t work out.

Another tidbit of Monday’s report was that Pruitt “routinely” asked his subordinates to put hotel reservations on their personal credits cards. The Post highlighted a particular instance in which a staffer put $600 worth of room fees on their credit card, for which Pruitt did not reimburse them. When the person raised the issue with Pruitt’s chief of staff, the chief of staff allegedly left an envelope containing $600 in cash in the staffer’s drawer.

That wasn’t all, though. A day later, Politico reported that the former treasurer of Pruitt’s political action committee is currently heading the agency that processes requests for records from Pruitt’s office, which one might think is a pretty big conflict of interest. “Someone so connected to Pruitt’s past and future political ambitions would have a clear motive to slow the release of records that undermine his image,” Andrew Bergman, who works for the Project on Government Oversight to track the EPA’s public records policies, told Politico.

Also on Tuesday – sorry, not done yet – CNN reported that Pruitt’s office kept secret calendars to conceal meetings and calls with industry representatives. Kevin Chmielewski, Pruitt’s former deputy chief of staff for operations, told the network that staffers “routinely” – a common word used to describe Pruitt’s corruption – met in his office to delete calendar records that might look suspicious. “We would have meetings [about] what we were going to take off on the official schedule,” Chmielewski said. “We had at one point three different schedules. One of them was one that no one else saw except three or four of us. It was a secret.”

In any other era, the details of Pruitt’s conduct revealed this week alone would have brought an end to his career in public service. But in perhaps the most corrupt period of modern American politics, for a man whose gumption has stood above the rest as nothing short of breathtaking, they barely even register. The only thing more remarkable than Pruitt’s unprecedented misuse of taxpayer money, efforts to conceal nefarious behavior and systematic abuse of his employees is that, despite it all, he still has a job. President Trump, who has repeatedly downplayed the severity of Pruitt’s actions, simply can’t be bothered to replace the man who once sued the agency he now leads.

Most recently, the president went to bat for his EPA chief early last month during a chaotic morning of interviews on the White House lawn. “Scott Pruitt is doing a great job within the walls of the EPA,” Trump said when pressed about Pruitt’s corruption. “I mean, we’re setting records.” The president then expressed sympathy for the embattled cabinet member, who once had an employee attempt to secure a used mattress from the Trump International Hotel. “He’s being attacked very viciously by the press, and I’m not saying that he’s blameless,” Trump said. “We’ll see what happens.”