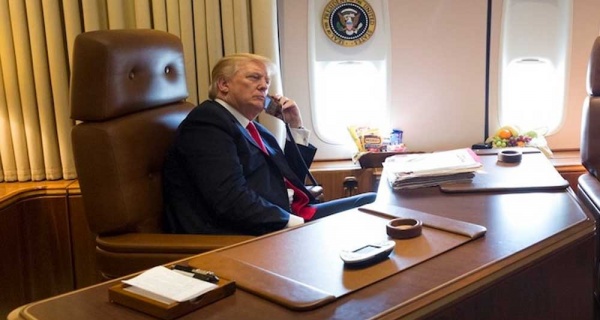 A comedian pretending to be Sen. Bob Menendez, D-N.J., says he talked on the phone with President Donald Trump earlier this week in an epic recorded prank call during which the president discussed a range of policy topics.

John Melendez, best known for his six-year stint on "The Howard Stern Show," when he was known as "Stuttering John," revealed his alleged talk with Trump on his podcast, "The Stuttering John Podcast." Melendez said he connected with Air Force One Wednesday night after he claimed he was Menendez.

NBC has not confirmed that the call took place or that the voice was that of Trump. The White House did not comment on the call, but notably did not tell reporters that the comedian's account was false.

Politico reported that the White House is trying to determine how the prank call happened, and Axios reported that staffers are "freaking out" over how the call got through to Air Force One.

An audio recording of the call, which lasts several minutes, picks up the conversation between two men, in which the person who Melendez says is Trump discussed his views on immigration and talks about when he plans to nominate a Supreme Court replacement for Justice Anthony Kennedy, who announced his retirement earlier this week.

On the call, which was first reported by the Daily Mail Online, the person purported to be Trump is heard saying, "Hi Bob. How are you? Congratulations on everything, we're proud of you.

'You went through a tough, tough situation, and I don't think a very fair situation, but congratulations,” the voice can be heard saying — a reference to Menendez having dodged a bribery conviction last year after a mistrial.

The Trump voice then talks about his desire to "take care of" immigration after Melendez asks what he can tell his "constituents" about families that had been separated at the U.S. border.

"Bob, let me just tell you: I want to be able to take care of the situation every bit as much as anyone else, at the top level. I'd like to do the larger solution rather than the smaller solution. They're doing them step by step. I think we can do the whole thing," the Trump voice says on the recording.

On Wednesday night, Trump would have just concluded a rally in Fargo, North Dakota, and would have been en route, on Air Force One, to Milwaukee, Wisconsin, where the president spent the night.

Melendez also asked the person on the call about whether he’ll "go more moderate or more conservative" with his Supreme Court nomination.

In the podcast, Melendez explains he first called the White House switchboard as himself but was told the president was unavailable and was then disconnected.

He then called back, posing as an assistant for Menendez, and was transferred to an operator, who told him Trump was not available.

Melendez gave the operator his cell phone number, which had an area code from California, and the operator said Trump would call him back.

An operator called back moments later to ask why the number Melendez had provided didn't match the number the White House had on file for the senator. The comic replied the number was different because he was on vacation.