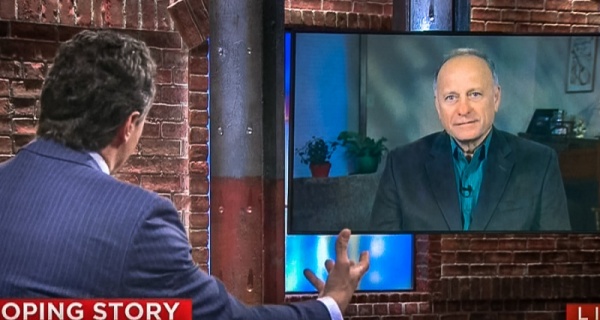 King repeatedly insisted that he was only trying to share a Breitbart article and didn’t know who the person was, but he refused to back down because “I’m not obligated to do a full background check on everybody.”

And if he did delete it, King said, the media would “pile on me.”

Cuomo bewilderedly emphasized again that he’s giving a hateful person a platform that they don’t deserve.

“You’re so caught up in this us vs. them thing… that you don’t want to give ground on even something that you acknowledge is wrong!” Cuomo cried. “How nuts is that?!”

King insisted we should just all move on from this “nothing story” about a congressman retweeting a Nazi sympathizer.

Cuomo brought up how King’s been criticized by Paul Ryan, but King responded, “Paul Ryan didn’t say anything. His spokesperson made a general comment that didn’t even have my name in it.”

When The Daily Beast’s Sam Stein asked Ryan’s office about King’s retweet of a Nazi sympathizer, a statement from Ryan’s spokesperson said, “The speaker has said many times that Nazis have no place in our politics, and clearly members should not engage with anyone promoting hate.”