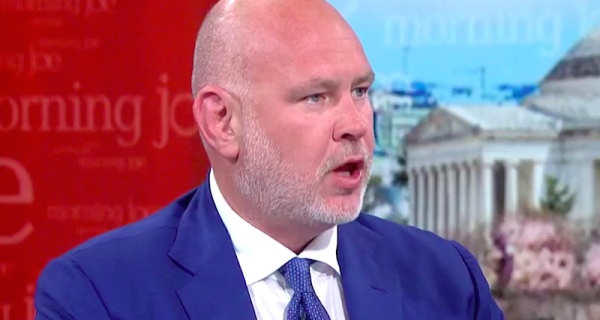 On this morning’s Morning Joe, host Joe Scarborough and Steve Schmidt go on a 6:26 minute rant on Donald Trump and his serial lying or as Steve puts it, “ blizzard of lies”. Schmidt who was served as John Mc Cain’s campaign manager, renounced his membership in the Republican party last week.   They started their attack in response to Trump’s lie that he “got a bad hand” on immigration at last night’s rally in Tennessee.  Joe refutes Trump’s assertion by citing a blizzard of statistics indicating that he actually got the “best of all hands” as a result of policies enacted by President Obama that put illegal immigration on the decline. Steve adds fuel to the fire started by Scarborough with this classic quote at the 4:54 mark “The American people elected, by a fluke, an imbecilic, former reality TV show host and conman who’s only affinity for reading anything were the Adolf Hitler speeches he kept on his nightstand.”  Thanks, Steve, we couldn't have said it any better ourselves.