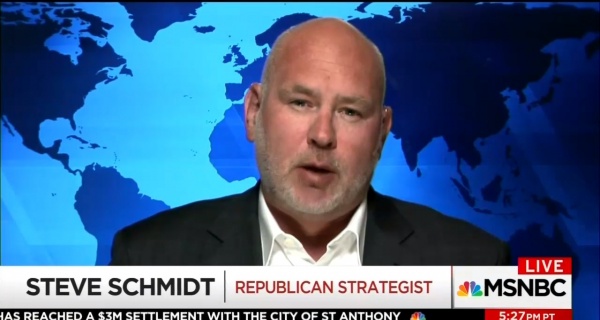 Date Posted: Wednesday, June 20th, 2018
Republican strategist Steve Schmidt — who convinced John McCain to appoint Sarah Palin as his running mate — renounced his membership in the Republican Party over the continuing abuses of President Donald Trump.
The GOP strategist and MSNBC analyst announced in an overnight tweetstorm that he was leaving “the party of Trump” after nearly 30 years as a registered voter.
29 years and nine months ago I registered to vote and became a member of The Republican Party which was founded in 1854 to oppose   slavery and stand for the dignity of human life. Today I renounce my membership in the Republican Party. It is fully the party of Trump.
- @SteveSchmidtSES
He called the party “corrupt, indecent and immoral,” and he said with few exceptions Republican elected officials were “feckless cowards who disgrace and dishonor the legacies of the party’s greatest leaders.”
“This child separation policy is connected to the worst abuses of Humanity in our history,” Schmidt said. “It is connected by the same evil that separated families during slavery and dislocated tribes and broke up Native American families. It is immoral and must be repudiated. Our country is in trouble. Our politics are badly broken.
“The first step to a season of renewal in our land is the absolute and utter repudiation of Trump and his vile enablers in the 2018 election by electing Democratic majorities,” he added. “I do not say this as an advocate of a progressive agenda. I say it as someone who retains belief in DEMOCRACY and decency.”
Schmidt condemned the family separation policy and “internment camps for babies” established by the Trump administration and shamed the officials who allowed that to happen.
“Everyone of these complicit leaders will carry this shame through history,” he said. “(Their) legacies will be ones of well earned ignominy. They have disgraced their country and brought dishonor to the Party of Lincoln.”
I have spent much of my life working in GOP politics. I have always believed that both parties were two of the most important institutions to the advancement of human freedom and dignity in the history of the world. Today the GOP has become a danger to our democracy and values.
— Steve Schmidt (@SteveSchmidtSES) June 20, 2018