WATCH: Rachel Maddow Breaks Down In Tears While Reading About The Treatment Of 'Babies' At The Border 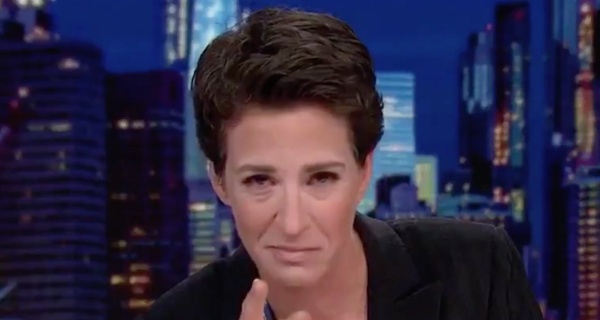 The Associated Press broke a story this evening that President Donald Trump’s administration has been sending babies to “at least three ‘tender age’ shelters” in south Texas. The story and images were so powerful that MSNBC host Rachel Maddow couldn’t read it and simply broke down.

“Sorry,” Maddow said several times. “Can we put up the graphic? No. We don’t have it.”

After many pauses, Maddow said that she’d just have to hand it off to her colleague Lawrence O’Donnell.

“The thought that they are going to be putting such little kids in an institutional setting? I mean it is hard for me to even wrap my mind around it,” Kay Bellor, vice president for programs at Lutheran Immigration and Refugee Service, told the AP. Her organization gives foster care and child welfare to migrant children. “Toddlers are being detained.”

“The facilities that they have for the most part are not licensed for tender age children,” director of migrant rights at Women’s Refugee Commission Michelle Brane told the AP.

She recalled meeting a 4-year-old girl in diapers in a McAllen warehouse where ICE agents is holding people.

“There is no model for how you house tons of little children in cots institutionally in our country. We don’t do orphanages, our child welfare has recognized that is an inappropriate setting for little children,” she said.

The United States ended the practice of having orphanages after psychologists and physicians warned that it would harm the development of children.

These days even the news can be too much for veteran reporters. Such was the case with Maddow on Tuesday night who succumbed to her empathy. It’s easy to understand why.