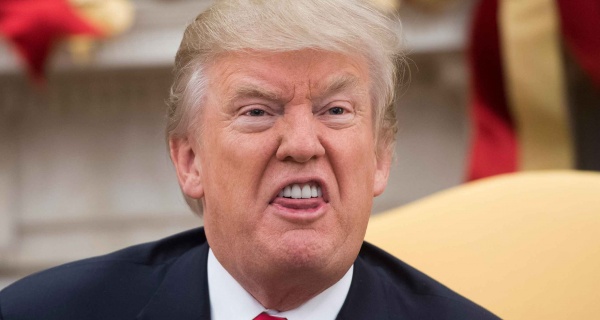 Date Posted: Tuesday, June 19th, 2018
Donald Trump on Tuesday elected—nay, made the political calculus—to use the word “infest” while describing real, human beings (“illegal immigrants”) who allegedly “pour” into our country and presumably must be stopped.
“Democrats are the problem,” the president wrote in Twitter. “They don’t care about crime and want illegal immigrants, no matter how bad they may be, to pour into and infest our Country, like MS-13.”
“They can’t win on their terrible policies, so they view them as potential voters!” he exclaimed.
Critics were quick to jump on Trump’s use of the word “infest,” which typically refers to insects or animals and immediately conjures
images of disease and death. And with good reason; using such dehumanizing language to describe living, actual human beings has precursors in Nazi Germany and World War II Japanese Internment Camps, among other instances of human rights abuses.
Writing for Forward, columnist Aviya Kushner notes of the 1940 German Nazi propaganda Film “Der Ewige Jude” (“The Eternal Jew”), “one of the film’s most notorious sequences compares Jews to rats that carry contagion, flood the continent, and devour precious resources.”
Kushner adds:
What is happening now is “defining the enemy. Substitute “continent” for “Country,” capitalized, and you get the picture. The roots of the particular word “infest” are also telling. The English word comes from the French infester or Latin infestare ‘assail’, from infestus ‘hostile’. So yes, it’s a word rooted in hostility.
David Livingstone Smith, the director of the Institute for Cognitive Science and Evolutionary Psychology at the University of New England and author of the 2011 book “Less Than Human,” told NPR the Nazis explicitly referred to their victims as Untermenschen (“subhumans”) to make it easier to carry out atrocities against them.
“It's wrong to kill a person, but permissible to exterminate a rat,” Smith explained. “To the Nazis, all the Jews, Gypsies and others were rats: dangerous, disease-carrying rats“Perhaps inevitably, the rhetoric of pest and infestation slipped into the rhetoric of extermination and eradication, as in the popular poster found in U.S. West Coast restaurants during World War II that proclaimed, ‘This restaurant poisons rats and Japs,’” they note.
Remarkably, the comparisons aren’t just metaphorical; as Steuter and Willis explain, the creators of chemical insecticides used against infestations “also created poison gas” and led “to the use of chemical defoliants as weapons"—the literal extermination of humans.
The process of dehumanization is essential to "to overcome the very deep and natural inhibitions they have against treating other people like game animals or vermin or dangerous predators,” Smith explained to NPR.
"We all know, despite what we see in the movies that it's very difficult, psychologically, to kill another human being up close and in cold blood, or to inflict atrocities on them,” Smith said.
Which brings us back to Trump’s use of the word “infest,” a calculated attempt to mitigate reasonable concerns over his administration’s barbaric “zero tolerance policy” by lumping in the innocent children of undocumented asylum seekers with the "vermin" Americans so desperately want to keep out.
Defenders of the president will say it’s just a word; they’ll say he meant only to dehumanize the real, living people who rape and murder and steal as opposed to the real, living people fleeing poverty and violence and death. They’ll feign outrage over comparisons to Nazi Germany or Japanese Internment camps like they feigned outrage over the accurate description of children in “cages.”
But words have meaning and historical context and historical significance. One can only hope that when Trump takes his rightful place in the history books, we’ll be reminded of who the real vermin are.