What Happened To The GOP? It's The Same Old Party Under New Management 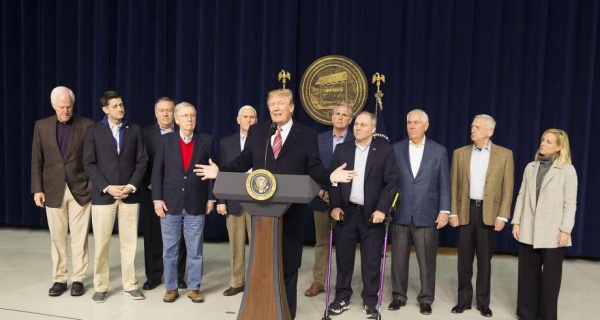 I'm getting a little tired of hearing how Donald Trump has hijacked the Republican Party.

I repeat, he has not!

This line of bull creates the impression that Trump orchestrated a Wall St. style hostile takeover, making it seem like he is an exception to the traditional make-up of the body politic of the Grand Old Party. Talk about Fake News!

Purveyors of this oft-repeated myth act as though the party will return to its normal roots once Trump is gone from office. The truth is--Trump ain’t no new thing. Has the “lame stream news media” forgotten so soon about Sarah Palin?  She tilled, seeded and fertilized the ground that Trump is now harvesting with his attacks against the media, the latest claiming "our country's biggest enemy is the fake news".

Just as Trump is not an exception in the long history of the Republican Party, Sarah Palin is not an outlier standing on a gangplank all by herself. She is joined by 58, 343, 671 cohorts who voted for her knowing full well she would be one heart beat away from assuming the presidency and mantle of the leader of the free world had she and McCain won.

The boogey man we’re up against is not just a tRump thing. It is a Republican thing. Eight years under President Obama's comprehensive and inclusive leadership may have caused us to forget what selective and exclusive Republican leadership is like. Trump is a reminder, but he is not an anomaly.

If we don’t gear up to meet the challenge in the November mid-terms, the Grand Old Party will decimate the Democrat party then and again in 2020. The good news.....there are more of us than there are of them. We just have to get “us” out to vote.