Watch: Trump Salutes North Korean General! If Obama Had Done That, The Impeachment Would Start Now 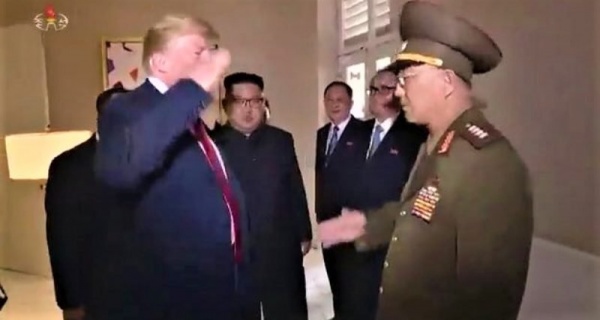 Date Posted: Thursday, June 14th, 2018
North Korean state media aired footage of President Trump saluting a top military official accompanying leader Kim Jong Un to the summit in Singapore this week. Despite making no substantive commitments, the footage shows the North Korean dictator won a crucial propaganda victory.
The as-of-yet unverified footage was aired during a 42-minute Korean Central Television documentary that “showed events largely from Kim’s perspective,” according to the Washington Post. “With its focus on Kim, the KCTV documentary seems to show North Koreans that their leader is the star of the show,” the Post wrote Thursday.

The documentary footage was later captured by BBC monitors, and appears to show Trump shaking hands with a number of Kim’s aides and officials. At one point, Trump greets one of Kim’s military generals, who salutes him, prompting Trump to salute back before moving on down the line.
As the BBC Monitoring team notes, Trump initially appears confused as to whether he should wait and shake hands with the general or salute back. Eventually, he opts for the latter.

The moment was quickly highlighted on North Korean news stations, which are propaganda vehicles controlled by the state, to portray Kim as having the upper hand in the negotiations, a feat made easier by Trump’s own words and actions later, following the summit.
Trump’s decision to salute the North Korean general isn’t strictly outside the rules, although it is peculiar.
The U.S. Army Regulations manual states that it’s customary for members of the armed services to “salute officers of friendly foreign nations when recognized as such” and that the president should be saluted by all uniformed personnel (although North Korea can hardly be considered “friendly”).
The State Department’s Foreign Service guide also suggests that diplomats should follow traditional greeting protocol when meeting officials from another country. However, protocol has long dictated that presidents traditionally are not required to bow or salute foreign dignitaries or military leaders, as The New York Times noted in 1994.

Several past presidents have faced scrutiny for abandoning tradition and showing deference to foreign officials. Both President Obama and President George W. Bush were slammed for bowing before Japanese emperors, and President Clinton was also slammed for appearing to bow slightly to the emperor during a meeting in 1994.
Obama specifically was criticized for appearing to “bow” to King Abdullah of Saudi Arabia in 2009, with right-wing publications and pundits claiming it was unbecoming of the president to show deference to the foreign leader or “kowtow” to his officials.
“American presidents do not bow before foreign dignitaries, whether they are princes, kings, or emperors,” The Weekly Standard’s Michael Goldfarb complained at the time.
Last May, however, Trump’s critics pointed out that he had also appeared to bow slightly when receiving the King Abdul Aziz Collar from King Salman in Saudi Arabia. Supporters claimed that Trump was only bending over or stooping down.