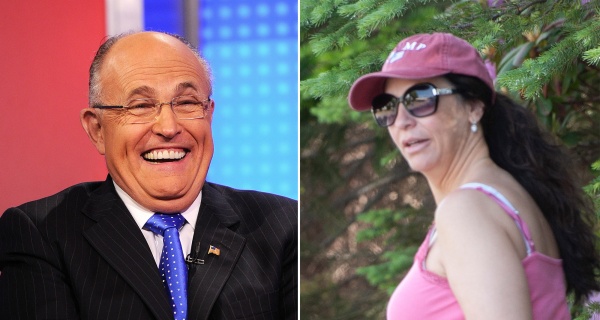 Rudy Giuliani boasted to friends that he was sleeping with a woman who had 'big boobs' before the identity of his rumored mistress became known on Tuesday, it has been revealed.

According to Page Six, the former New York City mayor told friends about his affair but did not reveal the woman's identity.

On Tuesday, the newspaper named the woman as 53-year-old doctor and hospital CEO Maria Rose Ryan. She is also the mother of Giuliani's former assistant, Vanessa Ryan.

Giuliani, 74, said the pair were 'just friends' and that even if they had spent the night together at a New Hampshire hotel before his divorce to wife Judith Nathan was underway, it happened when he was 'in effect, separated'.

Nathan, who married the politician in 2003 after starting her relationship with him when he was married to his second wife, however dismissed his denial of infidelity.

She came out swinging, saying: 'My husband’s denial of the affair with the married Mrs. Ryan is as false as his claim that we were separated when he took up with her.'

It has since been claimed that Ryan accompanied him to Israel last week and attended an event where she was introduced as his 'partner'.

Giuliani has been slapped down by the First Lady for speaking out of turn and has also drawn the ire of the administration for some of his remarks.

On June 7, he and Ryan visited the Hadassah Medical Organization in Jerusalem.

Giuliani was pictured at the hospital but Ryan was not.

'She, however, received a 'comprehensive tour' along with the former mayor.

Giuliani was in the country to attend a business conference. During his trip, he was filmed dancing with a group of Israeli women.

On March 29, Giuliani visited Cottage Hospital where Ryan is the CEO. Local networks filmed Giuliani's visit at the time.

He said he was there to look at the hospital's cybersecurity equipment which was of interest to one of his businesses, Giuliani Security and Safety.

Ryan also gave an interview about the importance of looking after patient documents.

Afterwards, they drove an hour to the hotel where staff said Giuliani was treated like a 'VIP'.

On the night in question, he, Ryan and two other men had dinner in the hotel restaurant.

Giuliani dined on a $32 Prime Rib.

Afterwards, he and Ryan went back to his room, the $524-a-night Summit Suite.

'We were all surprised because he is really getting on in years, and she was quite a bit younger than him.

'We were all like, "Hmmm,"'' the hotel staff member said.

The visit on March 29 came a week before Nathan filed for divorce on April 4.

Giuliani has denied having an affair with Ryan, who is married to a former marine, but said they were friends.

He admitted having dinner with her at the hotel in March but said they dined with others and that there was 'no proof' they had had sex.

'I do know Dr. Ryan. She is a friend of mine, so is her husband Bob.

'I was in effect separated by then,' he said.

Pushed on whether or not the pair had a romantic relationship, he said: 'I never spent the night with her. There’s no proof.

'There can’t be because we never did anything.'

He did not immediately respond to DailyMail.com's questions on Tuesday morning. 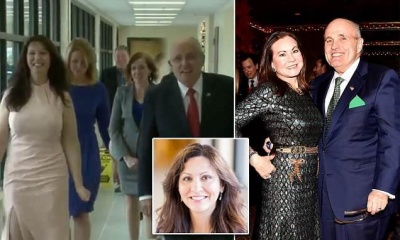 Ryan refused to comment when questioned by Page Six. Her husband told its journalist to 'f*** off' when they approached the pair on Tuesday.

Nathan has not commented on the claims either. In April, she filed a contested divorce proceeding.

The pair did not sign a prenup when they married in 2002.

They must now divide up their rumored $30million fortune which includes homes in New York and Florida.

Their romance famously began when Giuliani was still married to his second wife, Donna Hanover.

He met Nathan in a cigar bar in 1999 while he was still mayor.

In 2000, he announced at a press conference that he was leaving Hanover, the mother of his two children.

She was unaware of it beforehand and later participated in her own press conference where she claimed he'd had a previous affair with a different woman.

Giuliani's first marriage, to Regina Peruggi, was annulled in 1982 because they were second cousins.

Giuliani was brought on to Trump's legal team to help settle the matter but instead, he appears to have hindered it.

During an interview with Sean Hannity earlier this month, Giuliani confirmed what Trump had been dancing around for months - that the money was paid, that the president knew about it and that he even gave Cohen, who had 'funneled it through his law firm', the amount back.

'The money is going to turn out to be perfectly legal.

'[They] funneled it through the law firm, and the President repaid it,' he said.

He was also slammed for his recent claim that North Korean leader Kim Jong-un 'got on his hands and knees and begged' for a meeting with Trump.

Secretary of State Mike Pompeo was forced to speak out after that comment to insist: 'Giuliani does not speak for this administration'.

He was also slapped down by First Lady Melania Trump after asserting that she 'believes' the president did not sleep with Daniels in 2006.

Stephanie Grisham, Melania's spokesman, told The New York Times afterwards: ''I don't believe Mrs. Trump has ever discussed her thoughts on anything with Mr. Giuliani.'

They were together officially until 1982 when they had the marriage annulled. By then, Giuliani had taken a job in the Attorney General's office in Washington DC and had launched his political career.

They had been separated for seven years beforehand, parting ways in 1975. In 1982, he met Donna Hanover who would become his second wife.

Before they could tie the knot, he and Peruggi had to have their marriage dissolved. It was both dismissed by a court and annulled by the church and the pair claimed that they did not know they were related despite growing up together.

He and Hanover married in 1984 and had two children together.

They were together, seemingly happily, until the mid nineties when it was reported that Giuliani, by then the mayor of New York City, was having an affair with his press secretary, Cristyne Lategano.

The pair denied it fervently.

In 1999, at a stunning press conference, he announced his diagnosis along with the news that he was leaving Hanover for Judith Nathan who he described, like he did Ryan on Tuesday, as a 'very, very fine person'.

Hanover gave her own press conference afterwards on the steps of Gracie Mansion where she alluded to his alleged affair with Lategano.

'Today's turn of events brings me great sadness. I had hoped to keep this marriage together. For several years, it was difficult to participate in Rudy's public life because of his relationship with one staff member,' she said.

Giuliani later said that his prostate cancer diagnosis meant he wasn't having sex with anybody.

'Psychologically, too, if someone tells you you have cancer, the last thing you think about is sex, and then later on, it comes back,' he told Howard Stern in 2002.

He said he regained his strength 'within six months to a year'.

Donna refused to leave Gracie mansion and filed a restraining order to keep Nathan out of it.

In 2003, Giuliani and Nathan married in 2003 and, despite Donna's attempts, continued to live in Gracie Mansion. Giuliani beat his cancer in 2002.