While Trump Supporters Cheer, Migrant Children Are Being Punished 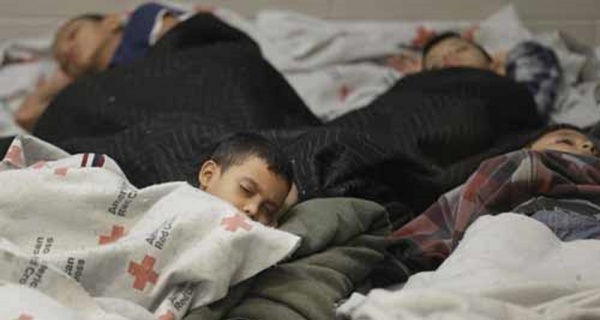 The New York Times had a story on Friday that should’ve brought shame and derision upon anyone who voted for the racist monster in the White House, and upon the racist monster that the other racist monster installed at the head of the Department of Justice. The United States government is now committing human rights atrocities within its own borders and against the most vulnerable people it can find. I don’t need to “understand,” much less take seriously, anyone who still supports this president* and his administration* because, if you do, you’ve taken the idea of America and run battery acid through its veins.

An American government escort handed over the 5-year-old child, identified on his travel documents as José, to the American woman whose family was entrusted with caring for him. He refused to take her hand. He did not cry. He was silent on the ride “home.” The first few nights, he cried himself to sleep. Then it turned into “just moaning and moaning,” said Janice, his foster mother. He recently slept through the night for the first time, though he still insists on tucking the family pictures under his pillow.

José’s separation from his father is part of the Trump administration’s latest and most widely debated border enforcement policy. Last month, Attorney General Jeff Sessions announced that the government would criminally prosecute everyone who crosses the border illegally, a directive that is already leading to the breakup of hundreds of migrant families and channeling children into shelters and foster homes across the country.

Does it get worse? Trick question.

Among other children recently fostered by Bethany families is an 18-month-old girl separated from her father, who has been detained. The child cries frequently, especially when she changes settings, such as leaving her foster family’s home to attend a doctor’s appointment.

Dona Abbott, Bethany’s refugee program director, said that these newly separated children frequently have nightmares, anxiety and stomachaches. A 3-year-old boy taken from his mother at the border was inconsolable during his flight to Michigan and cried incessantly on arrival at his new home last month, she said. He recently has begun to bond with his foster mother, from whom he is now reluctant to be apart. “He seems fearful of losing yet another attachment,” Ms. Abbott said.

What in the hell are we doing calling ourselves civilized, let alone a free nation?

The one thing that animated him was discussing his “photos,” as he called the family drawings. He introduced “mi familia,” pointing to the figures of his parents, brother and younger sister. Staring intensely at the sketch of his father, with a slight mustache and a cap, he repeated his name out loud again and again. It was “just me and him” on the trip from Honduras, he told Janice one night as he lay in bed shuffling the pictures, taking turns looking at one and then the other.

“He holds onto the two pictures for dear life,” Janice said, through tears. “It’s heart-wrenching.”… When sirens pierced the quiet of the night last week, José’s eyes widened with fear. “La violencia, la violencia,” he said. The family assured him that it was not violence; it was fire trucks.

Fire trucks. Jesus. Janice, the foster mother in the story, is practically the only person in it with whom I’m happy to share a planet.

“It’s incredibly conflicting for me as a parent to watch this little boy begin to just have fun and experience joy in simple pleasures,” Janice said. “His dad doesn’t get to see him being joyful. It’s as if these moments with his son have been stolen from him. I am no substitute.”

For sure, the boy’s family always seems to be on his mind.

At bedtime one night last week, he announced: “I am going with my papa on Saturday.”

To which Janice responded, “You know, mi amor, I don’t think it will be Saturday. First we have to get more information about where your dad is so that we can call him, and then we’ll see.”

He listened, and then asked her to remain in the room. “I don’t want to be alone,” he said.

Children are being punished, cruelly and mindlessly, for the perceived sins of their parents and, because we are a secular republic, it is not being done in the name of God but, rather, on the behalf of everybody in this country. That does not make this better. Not by a longshot.