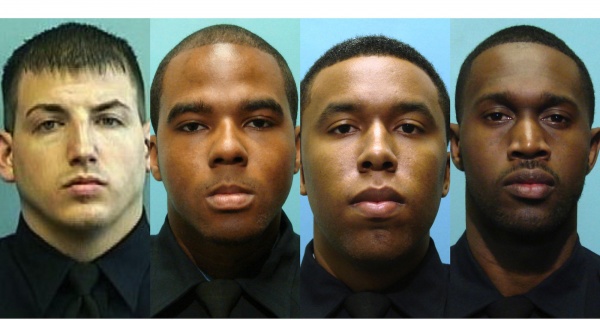 Former Baltimore Police Sgt. Wayne Jenkins, a key figure in the Gun Trace Task Force corruption case, was sentenced Thursday to 25 years in federal prison for his role in a stunning range of crimes.

The sentence handed down by U.S. District Judge Catherine C. Blake was five years less than the maximum possible term under Jenkins’ plea agreement. Prosecutors had asked that Jenkins, 37, of Middle River, receive the maximum sentence.

Assistant U.S. Attorney Leo Wise said the harm inflicted by Jenkins was “immeasurable,” walking through how he stole drugs on a “near-daily basis” for years and encouraged and helped his squad carry out robberies while bilking taxpayers for unworked overtime pay.

Jenkins sobbed during an apology that stretched for several minutes, his voice cracking throughout.

“I made so many mistakes, your honor,” Jenkins said. “I know it’s my fault. I deserve to be punished and I deserve to go to jail.”

Jenkins was one of two officers sentenced Thursday. Former Det. Marcus Taylor, 30, who fought his charges at trial and maintains his innocence, received 18 years in prison.

“I’m going away for all these years for something I didn’t do,” protested Taylor, saying the word of dishonest officers was being used against him.

Former detectives Evodio Hendrix and Maurice Ward, who pleaded guilty and cooperated with the government, will be sentenced Friday. In all, eight members of the gun task force were convicted.

Wise told Blake that Jenkins had operated his two plainclothes drug squads “like a criminal gang.”

Jenkins’ plea agreement includes admissions that he stole looted drugs during the April 2015 riots and spearheaded robberies that netted the officers up to tens of thousands of dollars at a time. He was recorded on a wiretap telling officers in one of those robberies to pretend he was a federal prosecutor while interrogating a man who they believed had drugs and money they could steal.

In addition to the sweeping racketeering charge, Jenkins faced charges of civil rights violations for a 2010 incident in which he and two other officers drove up suddenly on two men, who said they believed they were being robbed and fled. While driving away, the men got into an accident that killed 86-year-old Elbert Davis, and police planted drugs in their car. Both men went to federal prison.

Jenkins apologized to Davis’ family, who appeared in court, and to Umar Burley, who was freed from prison last year after the charges were revealed.

“From the bottom of my heart, I wish I could take that day back,” Jenkins said.

He maintained that he did not plant the drugs, but said he knew and helped cover it up. “I wish I had come clean when I found out the drugs were planted,” he said.

But Davis’ family said afterward that they were unmoved by the apology.

“Today was the first day we heard him say he was sorry,” one relative told reporters.

Jenkins was described as a “golden boy” viewed as “untouchable” within the department, and the department has yet to explain publicly how his conduct went unchecked so long. State lawmakers passed a bill creating a task force to investigate the corrupt task force, and are working to assemble a panel that will have subpoena power and hold public hearings.

Beyond the robberies, prosecutors outlined how Jenkins’ squads regularly violated people’s rights. Jenkins drove the wrong way on one-way streets, drove at groups of people and slammed on the brakes to see who would run, and searched vehicles and homes without probable cause. They referred to the latter as “sneak and peeks.”

The conduct was taking place in the midst of a civil rights investigation of the police department by the U.S. Department of Justice.

Det. Momodu Gondo testified last year that Jenkins was “very reckless. … I mean, he was just out of control, putting citizens at risk. … I just never saw anything like this.”

Wise said Thursday that the officers were running a “numbers game, stopping enough people without any cause in order to recover firearms.”

He said the police department relies on front-line supervisors like Jenkins to prevent misconduct and noted that the officers were fabricating video evidence using iPhones, even as the department was rolling out body cameras for officers as an accountability tool.

“It shows what a committed, sophisticated and devious person can do to thwart efforts to detect this behavior,” Wise told Blake. “If you step back and think about it, what chance do we have when you have people like Jenkins and his co-defendants fabricating evidence?”

Jenkins also formed an alliance with a bail bondsman and family friend, Donald Stepp, who would resell drugs the officers had taken off the street. Stepp estimated he made $1 million in drug sales and cut Jenkins in on $250,000 of the profits.

Blake said Jenkins was “putting poison in our community when he should have been protecting the community from that poison.”

After being caught, the officers were detained together in a county jail, where Jenkins exhorted them to stick to their cover stories and deny wrongdoing, Wise said. But he eventually pleaded guilty.

Jenkins, who is being held at the Chesapeake Detention Facility, was led into the courtroom in a maroon jumpsuit and only briefly glanced at the full crowd of spectators. He appeared emotional from the outset of the hearing.

Steve Levin, Jenkins’ attorney, said Jenkins was consumed by regret. Friends and relatives described the father of three young children as a devoted family man who helped his community.

“His dream now is that he will have some shred of a life after serving [a hoped-for sentence of] 20 years,” Levin said. “It is, as dreams go, not much. But it is something to hold onto.”

In his apology, Jenkins said he tarnished his police badge and disgraced the Marines. He and his wife lost a child in late 2015; he lamented that he was no longer able to visit the child’s grave each Sunday. And he said he was crushed to have no relationship with an 18-month-old child born just a few months before his arrest.

“I brought this on myself,” he said.

Jenkins said he had never read the Bible before his incarceration. “Now I’m one of those people who went to jail and found God. I’ve read the Bible 31 times. I can’t stop reading it, and praying for forgiveness.”

Taylor, of Glen Burnie, was the youngest of the eight officers charged in the federal case, and had worked with Jenkins for two years.

Jurors convicted Taylor of taking part in multiple robberies, dating back to 2014 before he worked with Jenkins. Assistant U.S. Attorney Derek Hines said Taylor was “consumed by greed.”

Defense attorney Jenifer Wicks told Blake on Thursday that it was “troubling” that the word of officers who had spent years lying about their conduct was being used against Taylor.

Taylor spread papers in front of him at the defense table, and pointed out what he said were inconsistencies in testimony against him. For example, he said he had been accused of getting overtime while on vacation in the Dominican Republic, but he said someone else had signed his pay slips. He also said the amount of money he was accused of taking in one instance differed.

“I joined the Baltimore Police Department to help people,” Taylor said. “I respect the jury, but I still maintain my innocence, and I will fight to prove my innocence.”