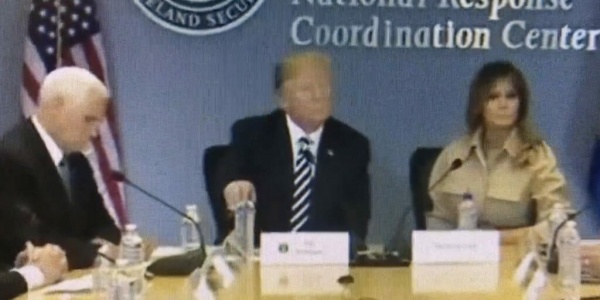 Date Posted: Thursday, June 7th, 2018
Vice President Mike Pence seeeth. Vice President Mike Pence doeth.
In a moment that quickly went viral and became the source of laughter (as well as concern), Pence was captured in an extreme sycophantic moment as he robotically removed a water bottle from a conference table after President Donald Trump—for no good reason that anyone on Earth has yet thought of—did so first.
Watch:
In response, Twitter howled:
I am laughing so goddamn hard at this video of Trump inexplicably putting his water bottle on the floor, and Pence immediately doing the same for no reason whatsoever. pic.twitter.com/qEFPzKClYj
— Jules Suzdaltsev (@jules_su) June 6, 2018
Monkey see / monkey do !
How scary & pathetic !
Pence is so obsequious for Trumpy ! So https://t.co/rGl9WoqdkW
— Robert Lerman (@lerman_robert) June 7, 2018
It's probably one of his 'signals' with Pence 'If I put my water bottle on the floor that means I hate what they're saying - if you agree, put your water bottle on the floor' - you know, like kids in a tree house
— Kate McClelland (@katemcclelland7) June 6, 2018
Yes, this is funny, but on another level, oh so disturbing. https://t.co/OBOYb48s6V
— Harvey Myers (@HarveyMyersIv) June 7, 2018
mother isn’t gonna be able to look at him for a week https://t.co/5YKaIXxFza
— Ashley Feinberg (@ashleyfeinberg) June 7, 2018
This must be retweeted by all of Earth. https://t.co/gPMehPOvCx
— Judd Apatow (@JuddApatow) June 7, 2018