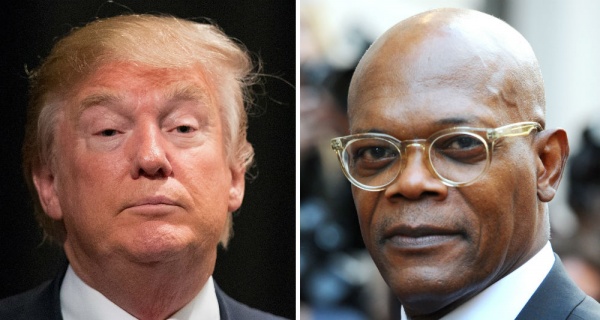 Date Posted: Thursday, June 7th, 2018
Recently, people have been questioning if President Trump knows the words to America's most patriotic songs, and on Tuesday, a prominent actor joined in. Samuel L. Jackson blasted Trump over the national anthem on Twitter, saying he wants "proof" that the president knows the words to "The Star-Spangled Banner."
"I want Proof, the M*thaf*kker demanding folks stand for the Anthem actually knows the words to the Anthem!!" he wrote, seemingly calling the president hypocritical for taking the songs seriously in the context of NFL protests, but not when it comes to singing them himself.
Earlier this week, Trump came under fire after he seemed to not know the words to "God Bless America" during a ceremony he held in honor of the American flag. He sang the first two lines of the song while the U.S. Marine Corps played, but then abruptly stopped and began nodding along instead. The Washington Post reported that the president has seemed to mess up the lyrics to the national anthem or "God Bless America" at least four times during his tenure in office.
Watch the video below:
Jackson's tweet referenced the recent wave of high-profile NFL protests in which players take a knee during the anthem to protest police brutality.
Trump decided to hold a flag ceremony in part because of these protests. He announced the event after disinviting members of the Philadelphia Eagles to the White House, implying that he disagreed with their refusal to stand during the anthem in past games.
But in actuality, Eagles players stood for the anthem during every game last season, according to NBC News. Some people have speculated that Trump was offended that few players planned to attend the White House visit and used the protests as an excuse to rescind his invitation.
"We love our country. We respect our flag. We always proudly stand for the national anthem," Trump said during the ceremony. "We stand to honor our military, and to honor our country and to remember the fallen heroes who never made it back home."
To Jackson, holding the national anthem in such high esteem means that you should also know how to sing it. When Trump attended the college national football championship in January, he appeared to sing only a fragmented version of the first verse, according to The Washington Post. He did seem to sing the anthem's entirety at least once, though, on the day following his inauguration.
Jackson's tweet on Tuesday wasn't the first time that he'd gotten into a mild Twitter spat with the president. The actor accused Trump of cheating at golf back in 2016, to which the latter replied with a harsh tweet: "I don't know @SamuelLJackson, to best of my knowledge haven't played golf w/him & think he does too many TV commercials—boring. Not a fan." Jackson, in turn, posted an image on Instagram of a bill that Trump had sent him for being a member at one of his golf courses (possibly indicating that they do know each other).
Jackson is an outspoken Trump critic. He's brought up the topic of Trump and "anthems" before, though it wasn't in regard to the NFL protests (for which he's indicated his support). During the 2016 presidential campaign, he expressed his interest in singing a duet with Trump to Billie Holiday's "Strange Fruit," which he called an "anthem" of the civil rights movement. While hosting a karaoke fashion event, he told the crowd: "I would want to see if he could handle it, I know he knows what it means."
If Trump insists on singing only some of the lyrics in televised appearances, Jackson and others are going to keep demanding "proof" of his patriotism.