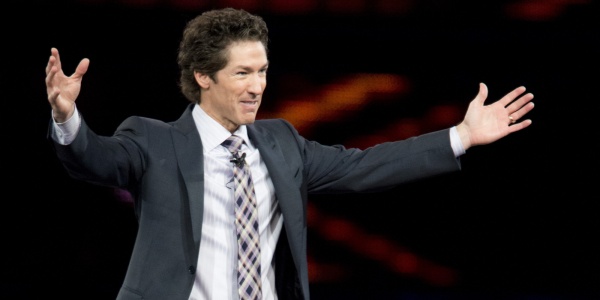 Date Posted: Monday, June 4th, 2018
He stumbled through sentences. He shuffled his notes. He shifted nervously in an oversized suit.
Joel Osteen had never delivered a sermon before.
Steadying himself, he directed the congregation to verses from 1 Corinthians. As several thousand worshippers at Houston's Lakewood Church flipped the pages of their Bibles, he read aloud: "Run your race with purpose in every step."
Then he offered his own gloss on the Scripture.
"You have value," he said.
"God has a purpose and a plan for you."
"You've got to realize that you are a person of destiny."
Those ideas would vault him from obscurity to the height of religious celebrity within the next few years. But on that January morning in 1999, he was just a stand-in for his father, televangelist John Osteen, who lay dying in a hospital bed.
His mother, Dodie, didn't know how long he'd last onstage. Maybe 10 minutes, she thought.
***
From that faltering start, Osteen went on to became Lakewood's new leader and visionary, and the church grew to become America's largest.
His rise is a rarity in the history of American religion. Seldom has the son of a famous evangelist eclipsed his father.
At first, few would have thought him capable of it. A college dropout, he lacked his father's theological training and mastery of Scripture. He had no experience as a preacher. But he had an intuitive feel for television and, later, social media. He understood that he could use both to reach large numbers of people and forge intimate connections at the same time.
He recognized that corporate-style marketing could make Joel Osteen a national, even a global, brand synonymous with his particular creed of personal empowerment through God. One of his earliest hires was a branding expert.
In his sermons and his personal appearance, he focused intently on the details — on finding the memorable word, the emphatic gesture, the right color combination, neither too bold nor too quiet.
To transform his church, he had to transform himself. Shy and private by nature, he learned to be ebullient, funny and self-deprecating before a crowd. He succeeded so well that in time, his closest friends barely recognized the man they saw on stage.
His father had filled churches with avid followers. He would fill whole sports arenas.
***
John and Dodie Osteen founded Lakewood Church in 1959, in an abandoned East Houston feed store.
The son of a cotton farmer from Paris, Texas, John had been working at a Fort Worth movie theater 20 years earlier when a friend introduced him to Jesus. He went to college to study religion and was ordained as a Southern Baptist minister.
He moved to Baytown, where he met and married Dodie Pilgrim. He preached at Houston-area churches before deciding to establish his own.
About 90 people gathered to hear his inaugural sermon at Lakewood.
Paul Osteen, the oldest of the couple's five children, swept the floors of the church as a young boy. They were so worn that dirt disappeared through the cracks.
"You didn't have to really have a dust pan," he recalled.
The church grew quickly in an era of healing revivals and miracle-making that gave rise to the prosperity gospel, the belief that God would reward his truest followers with material wealth so long as they invested in their churches. The notion had mass appeal and turned many fledgling ministries into megachurches.
By 1979, the little church in the feed store had moved into a new building next door with seating for 5,000. They called it the Oasis of Love.
***
The Osteens and their children lived in Humble in a ranch house on Mustang Trail. Joel filled his childhood days riding his bike and playing Little League baseball. He spent summers in the mail room at Lakewood, filling orders for his father's books. Eventually, he learned to operate the boxy cameras the church used to film services.
He played basketball at Humble High School, never making varsity. But he did stand out for a quality that would prove useful years later.

During his senior year, he was voted "best dressed" along with classmate Kerrie Outlaw. They appeared together — he in a suit, she in a white dress — at an awards ceremony that spring of 1981.
She remembers him as kind and well-liked. He was also quiet and introverted. That he would someday stand before thousands of people preaching the gospel would have been unimaginable.
"I could never have seen him doing that," she said. "He would never bring attention to himself."
He enrolled at Oral Roberts University to study broadcasting but dropped out after his freshman year. He returned to Houston, saying he felt God's calling to help his father start his own TV ministry.
He mastered camera angles that showed the congregation's size and racial diversity. While editing videotape of his father's sermons, he sometimes watched with the volume turned low to appreciate how much could be communicated by facial expressions alone.
The smallest details consumed his attention. He arrived at his parents' house every Saturday to pick out a suit, shirt and tie for his father to wear at the next day's service. Dodie recalled purchasing ties for her husband at Foley's, only to return them when he admitted he preferred the ones Joel picked.
Phil Cooke, a theologian and media consultant who helped produce John's TV programs, watched the younger Osteen's pursuit of perfection with astonishment as they shot openings and transitions. Gentle but determined, he would cajole his father to do another take. Then another. And another.
"I'd have to be the referee," Cooke said. "He had a vision in his mind of how he thought that scene should be like, and he would not let it go."
As the prosperity gospel gained influence, some televangelists rattled their collection tins on television, beseeching the audience to "sow more seed" in anticipation of a rich harvest.
John Osteen's approach centered on overall well-being rather than financial riches. He never asked for money on television, an example followed by his son.
As sexual improprieties or financial scandals disgraced other TV preachers, Lakewood thrived. In 1988, the congregation moved into an 8,200-seat building in northeast Houston. Ten thousand people packed the sanctuary for the dedication. John delivered a fiery sermon that would usher in another decade of growth.
"The greatest day of the church is just ahead of us," he proclaimed. "Hallelujah!"
***
Joel's behind-the-scenes role perfectly suited his personality. He seemed to have found his niche within the family business.

By the time the church moved into its new sanctuary, he was married. He had met Victoria Iloff in 1985 when he walked into her family's jewelry store and saw her behind the counter. He wanted to buy a watch battery. She persuaded him to buy a new watch.
The couple sought challenges to tackle together, sometimes buying old houses to fix and flip.
"It was just fun," Victoria recalled of their early years. "Through that, we learned how to work together."
Their son Jonathan was born in 1995, followed by a daughter, Alexandra, in 1998.
Not long after, the Osteen clan faced a crisis. Their 77-year-old patriarch was gravely ill with heart and kidney disease, and he had never designated a successor.
By January 1999, he was in the hospital, too weak to preach. To Dodie's surprise, her husband called Joel to ask if he would fill in for him that Sunday. He agreed, reluctantly. Family members didn't know what to expect.
He spoke for 35 minutes, and for all his jitters, he had an unmistakable presence.
The elder Osteen died a few days later. At his memorial service, Dodie told a packed house that the family had discovered a new preacher in its ranks.
"Guess who asked me if they could preach again Sunday," she said. "Would you think it'd be Joel Osteen?"
He stared at his shoes as the audience rose to applaud him.
Victoria helped calm his doubts about whether he could carry the mantle. After his father's death, he called Lakewood's TV agent to cancel its Sunday night program on the Family Channel.
His wife persuaded him to call back and reclaim the time slot.
"I always knew Joel had something else in him," she said.

Phillip Sinitiere, a professor at Houston's College of Biblical Studies and author of a book about Lakewood called "Salvation with a Smile," was in the audience. He described the presentation in a recent interview and shared handouts he had saved.
He recalled his wonder at the boldness of Lakewood's marketing strategy, one that few churches at the time could rival.
Dodds asked the assembled church leaders to identify luxury car brands. BMW and Lexus came to mind. When he asked about coffee, most people thought of Starbucks.
Then, Sinitiere recalled, Dodds brought up the Lakewood pastor.
When Americans thought of religion, Dodds said he wanted them to think of Joel Osteen.