WATCH: Giuliani Booed At Yankee Stadium On His Birthday 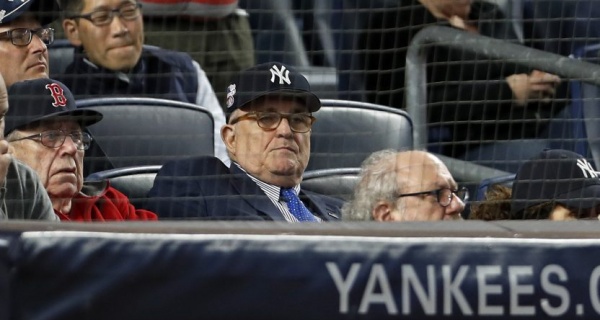 Date Posted: Tuesday, May 29th, 2018
Rudy Giuliani wasn’t getting much love from New York Yankees fans on his birthday.
The former New York City mayor took in a Yankees game on Memorial Day to celebrate his 74th birthday, and the stadium PA announcer pointed out Giuliani to wish him a happy birthday. Fans did not share the sentiment, the New York Daily News noted, as Giuliani was greeted with a chorus of boos from the Yankees faithful.
The rough treatment is likely related to Rudy Giuliani’s new role as the attack dog for Donald Trump. The newest member of Trump’s legal team has made the rounds on television news programs, loudly declaring that the president is innocent in the ongoing Russia probe.
Giuliani made headlines this week when he appeared to admit that the allegations made both by Giuliani and Donald Trump that President Barack Obama spied on Trump’s campaign were really part of a public relations ploy to get the public to turn against special counsel Robert Mueller.
“They’re giving us the material to do it. Of course, we have to do it in defending the President. To a large extent, remember Dana, what we’re doing here, it is the public opinion, because eventually the decision here is going to be impeach or not impeach,” Giuliani said in an appearance on CNN’s State of the Union (via the Huffington Post) about Trump’s allegations the FBI spied on his campaign.
Giuliani went on to say that the president would need the public on his side if he faces impeachment, and the “Spygate” allegations are meant to do just that.
Giuliani has also made what seemed to be some damaging admissions, including confirmation that Trump had paid adult film star Stormy Daniels a total of $130,000 to keep quiet about an alleged affair the two had in 2006.
Though public sentiment may be turning against Rudy Giuliani as he sides with the largely unpopular Donald Trump, it was still a surprise to many that the city’s former mayor would be booed in his own town. Word of the reaction from the Yankees fans spread quickly across social media, with many of Giuliani’s critics taking the opportunity to gloat.