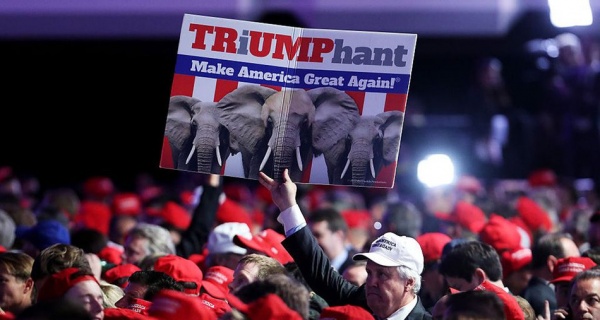 Americans, divided and polarized as they are, live in two distinct worlds. In one world, the earth is not flat, climate change is real and Bill and Hillary aren’t pimping kids out in the basement of a pizza restaurant.

The other world is devoid of reason, evidence and pretty much any type of historical facts. Despite the fact that Trump voters have been fleeced by the biggest con man in the world, they continue to devour the lies he sells on a silver platter. When it comes to facts, Trump supporters aren’t head over heels in love with them. After all, Trump’s rise came as a result of playing to uninformed and angry people’s primal and worst sensibilities. They’re right and the entire world is wrong, because that’s what their cult leader told them, and who needs Google anyway? Here are 10 incredibly fake facts that Trump supporters believe are true.

1. Trump is a devoted Christian.

The thrice-married, pu$$y-grabbing Trump is actually quite the exemplary Christian, at least in the minds of his supporters. They are so convinced of this fake fact that they welcomed Trump at Jerry Falwell's Liberty University this past weekend, where the president was given an honorary doctorate.

2. The economy is improving because of Trump.

If there’s anything Trump does better than filing for Chapter 11, it’s taking credit for things other people have done. Part-time First Lady Melania Trump stole a speech from Michelle Obama, so it only seems fitting that the Donald do it as well. Now, even though he hasn’t signed a single piece of economic legislation and all economic data is just a continuation of President Obama’s efforts, Trump seems to have no issue taking credit for all of the positive economic news. And despite the fact that Trump had been in office for a whopping two weeks, Fox News gave Trump full credit for a positive jobs report in January.

3. ‘Millions voted illegally’ (without a single shred of proof).

Not too long ago, a poll found that 55 percent of Trump supporters believe his daft conspiracy theory that the only reason he lost the popular vote is because “millions voted illegally” for Hillary Clinton. Ignorance is bliss, right?

4. Immigration is off the rails and illegal immigrants are all violent criminals.

Trump played to the racist tendencies of working-class whites when he declared that Mexicans were criminals and rapists, except for some. He also took a page from Richard Nixon’s handbook and touted law and order for the silent majority. But here’s the thing for folks who reside in Realitytown, USA: net migration from Mexico is basically zero and stats show that undocumented immigrants are actually less likely to commit crimes than American citizens. But facts are not how you Make America Great Again!

5. Trump should have the power to overturn judicial rulings.

Utterly clueless when it comes to the U.S. Constitution (except for the Second Amendment), 51 percent of Trump supporters think the Executive Branch should have the power to overrule the Judicial Branch. This came after Trump was overruled in his efforts to impose a Muslim travel ban.

6. Trumpcare is great while Obamacare is awful.

Okay, this one is especially heinous. During Trump’s presidential campaign, he talked constantly about how easy it would be to gut Obamacare and impose a version of his own that would cover everyone. Here are the facts:

*Around 24 million people will lose their health insurance—many of them his most vocal supportersPremiums, especially for Americans 50 and older, will increase dramatically.

*States can opt-out of protecting people with pre-existing conditions.

*Coverage will get worse.

*Medicaid will be gutted.

Trumpcare is stealing from the poor to give to the rich, but his supporters don’t mind being screwed by their dear leader.

7. Barack Obama was not born in the United States.

Ah yes, the birther question. The very thing that catapulted a washed-up reality TV host to political fame and fortune. Trump had been accusing President Obama of not being born in America for years, which seems to have resonated with his supporters: 59 percent of Trump supporters didn’t think Obama was born in the United States, while just a mere 23 percent said he was.

Despite the fact that gun ownership ballooned under President Obama and his sensible gun legislation failed miserably in the NRA-owned Republican Congress, Trump supporters believed there was a major “war” on guns. The biggest (and stupidest) conspiracy was the one involving Jade Helm, when right-wingers thought a military exercise was actually a secret ploy by Obama to declare martial law and seize all the guns.

9. All the investigations into Trump’s ties to Russia are bogus.

Despite the overwhelming amount of evidence that continues to pile up regarding Trump’s ties to Putin during the 2016 presidential campaign and beyond, his supporters will hear nothing of it. They love Russia and think CNN and every other major news outlet is fake news that hates America. Bear in mind, all of this seems to be leading up to impeachment. But yeah, nothing to see here.

10. Trump is honest and trustworthy.

This may be the greatest fake fact of fake facts: Trump is honest and trustworthy. Despite the fact that nearly everything that comes out of his mouth is a brazen lie that can be disproved in a New York minute, his supporters think he’s honest. That’s just a special kind of ignorance you can’t fix. While some of his supporters have since seen the light of day, a majority of them still trust him despite all the explanations of his lies the media makes.

In short, it may just take Trump throwing puppies into a firepit for a majority of his supporters to recognize him for the lying con man that he is. Let’s certainly hope not, as that may not be out of the realm of possibility.