Trump Continues To Use Racism To Feed His Base 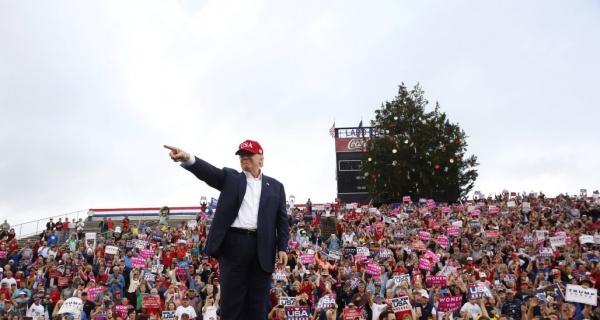 President Donald Trump doesn’t actually understand immigration law, according to administration officials — but he uses the issue to stoke his angry base and delight staffers.

Homeland Security secretary Kirstjen Nielsen complains that her job is nearly impossible because Trump doesn’t really grasp immigration but is obsessed by it, and he regularly berates her for failing to halt the flow of migrants, administration sources told the Washington Post.

“The president has a very rudimentary understanding of what the border is all about and how you secure it,” a former DHS staffer told the newspaper. “And she’s also not one of the border fire-eaters that have his ear right now. She’s in an impossible, no-win situation.”

The president sees anti-immigrant rhetoric as the reason he won in 2016, and the Post described how Trump speaks about Hispanic immigrants in private.

“The night before Trump delivered his first speech to Congress in February 2017, he huddled with Jared Kushner and (senior adviser Stephen) Miller in the Oval Office to talk immigration,” the newspaper reported. “The president reluctantly agreed with suggestions he strike a gentler tone on immigration in the speech.”

The president reminded Miller and his son-in-law that crowds loved his harsh tone against immigrants, and he improvised the sort of speech he believed his red-capped supporters would enjoy.

“Acting as if he was at a rally, he then read aloud a few made up Hispanic names and described potential crimes they could have committed, like rape or murder,” the Post reported. “Then, he said, the crowds would roar when the criminals were thrown out of the country — as they did when he highlighted crimes by illegal immigrants at his rallies, according to a person present for the exchange and another briefed on it later. Miller and Kushner laughed.”

A senior White House official conceded that Trump did discuss “crowd enthusiasm for crackdowns on criminal aliens,” but denied that he made up Hispanic names for the exercise.