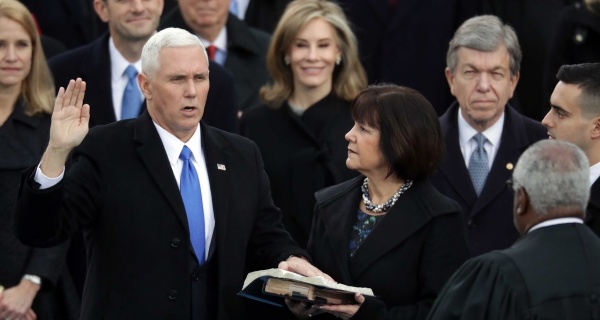 Date Posted: Tuesday, May 22nd, 2018
Republican strategist Steve Schmidt destroyed Mike Pence for being a total fraud who claims to take the moral high ground while slobbering and groveling to Donald Trump.
Schmidt said of Pence on MSNBC’s Deadline: White House, “He is a titanic, and I mean titanic fraud. We have listened to this guy for many, many years in this country on his moral high horse assaulting the dignity of gay people, across the board. His moral preening is famous throughout the land. Yet he is the most obsequious of all Trump’s cultists in the cabinet. There have been occasions as George Will points out where speaking on trump in front of trump where he compliments him on an average of 3.2 seconds. We have never seen such slobbering servility by a high government official in this country than we do in Mike pence and Donald Trump. It is amazing.”
Schmidt later compared Pence to the house butler at Mar-a-Lago, “He’s supposed to be serving the American people. He’s the vice-president of the United States, and he acts like he’s the house butler at Mar-a-Lago.”
It was a brutal burial by the Republican strategist that was one hundred percent accurate. Pence has no credibility. He is known as Donald Trump’s stooge, and perhaps the weakest vice president in history, which is saying a lot. One of the best things to come out of the Trump administration is that America gets to see the real Mike Pence. The spineless, hate-filled sellout, who is a fake and a fraud.
Vice President Pence is such a disgusting fraud that even his fellow Republicans are calling it out.