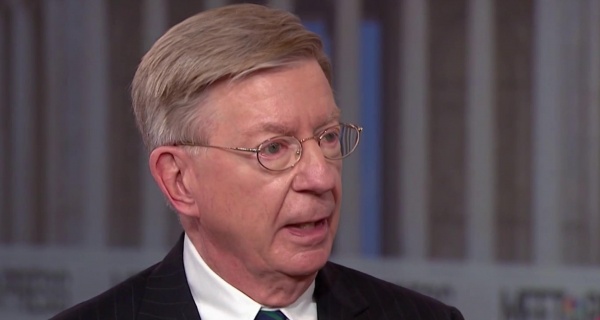 Watch the video below which explains why George Will wrote that VP Mike Pence is worse than President Trump and elaborates on his use of the word “oleaginous” to slam Mike Pence in a recent column. After watching the video read what he actually wrote. The column is printed in its entirety beneath the video.

Donald Trump, with his feral cunning, knew. The oleaginous Mike Pence, with his talent for toadyism and appetite for obsequiousness, could, Trump knew, become America’s most repulsive public figure. And Pence, who has reached this pinnacle by dethroning his benefactor, is augmenting the public stock of useful knowledge. Because his is the authentic voice of today’s lickspittle Republican Party, he clarifies this year’s elections: Vote Republican to ratify groveling as governing.

Last June, a Trump Cabinet meeting featured testimonials offered to Dear Leader by his forelock-tugging colleagues. His chief of staff, Reince Priebus, caught the spirit of the worship service by thanking Trump for the “blessing” of being allowed to serve him. The hosannas poured forth from around the table, unredeemed by even a scintilla of insincerity. Priebus was soon deprived of his blessing, as was Tom Price. Before Price’s ecstasy of public service was truncated because of his incontinent enthusiasm for charter flights, he was the secretary of health and human services who at the Cabinet meeting said, “I can’t thank you enough for the privileges you’ve given me.” The vice president chimed in but saved his best riff for a December Cabinet meeting when, as The Post’s Aaron Blake calculated, Pence praised Trump once every 12 seconds for three minutes: “I’m deeply humbled. . . . ” Judging by the number of times Pence announces himself “humbled,” he might seem proud of his humility, but that is impossible because he is conspicuously devout and pride is a sin.
Between those two Cabinet meetings, Pence and his retinue flew to Indiana for the purpose of walking out of an Indianapolis Colts football game, thereby demonstrating that football players kneeling during the national anthem are intolerable to someone of Pence’s refined sense of right and wrong. Which brings us to his Arizona salute last week to Joe Arpaio, who was sheriff of Maricopa County until in 2016 voters wearied of his act.
Noting that Arpaio was in his Tempe audience, Pence, oozing unctuousness from every pore, called Arpaio “another favorite,” professed himself “honored” by Arpaio’s presence, and praised him as “a tireless champion of . . . the rule of law.” Arpaio, a grandstanding, camera-chasing bully and darling of the thuggish right, is also a criminal, convicted of contempt of court for ignoring a federal judge’s order to desist from certain illegal law enforcement practices. Pence’s performance occurred eight miles from the home of Sen. John McCain, who could teach Pence — or perhaps not — something about honor.
Henry Adams said that “practical politics consists in ignoring facts,” but what was the practicality in Pence’s disregard of the facts about Arpaio? His pandering had no purpose beyond serving Pence’s vocation, which is to ingratiate himself with his audience of the moment. The audience for his praise of Arpaio was given to chanting “Build that wall!” and applauded Arpaio, who wears Trump’s pardon like a boutonniere.
Hoosiers, of whom Pence is one, sometimes say that although Abraham Lincoln was born in Kentucky and flourished in Illinois, he spent his formative years — December 1816 to March 1830 — in Indiana, which he left at age 21. Be that as it may, on Jan. 27, 1838, Lincoln, then 28, delivered his first great speech, to the Young Men’s Lyceum in Springfield. Less than three months earlier, Elijah Lovejoy, an abolitionist newspaper editor in Alton, Ill., 67 miles from Springfield, was murdered by a pro-slavery mob. Without mentioning Lovejoy — it would have been unnecessary — Lincoln lamented that throughout America, “so lately famed for love of law and order,” there was a “mobocratic spirit” among “the vicious portion of [the] population.” So, “let reverence for the laws . . . become the political religion of the nation.” Pence, one of evangelical Christians’ favorite pin-ups, genuflects at various altars, as the mobocratic spirit and the vicious portion require.
It is said that one cannot blame people who applaud Arpaio and support his rehabilitators (Trump, Pence, et al.), because, well, globalization or health-care costs or something. Actually, one must either blame them or condescend to them as lacking moral agency. Republicans silent about Pence have no such excuse.
There will be negligible legislating by the next Congress, so ballots cast this November will be most important as validations or repudiations of the harmonizing voices of Trump, Pence, Arpaio and the like. Trump is what he is, a floundering, inarticulate jumble of gnawing insecurities and not-at-all compensating vanities, which is pathetic. Pence is what he has chosen to be, which is horrifying.