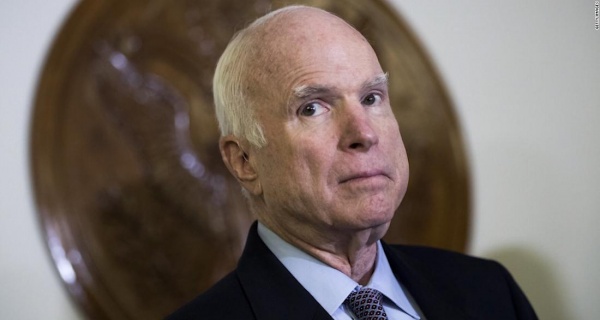 Straight Talk has long been Sen. John McCain's political hallmark. Now, with his life quite literally on the line, the senator is offering straight talk and more in a new memoir, co-authored by the man our Chip Reid's been talking to:

John McCain returned to the U.S. Senate last July, for a critical vote on a Republican plan to repeal the Affordable Care Act, and he was nearly moved to tears by his reception.

Just one week earlier, the Arizona senator had been diagnosed with brain cancer, after undergoing emergency surgery to remove a blood clot.

But just moments after that standing ovation, McCain -- always the maverick -- chastised colleagues in both parties with some of his renowned straight talk:

Mark Salter, who has been writing speeches for McCain for 30 years," said McCain's words really resonated: "Part of it obviously was because he had just received this very tough diagnosis. And he looked like he had just had brain surgery. That speech spoke of his love for the place and what it was capable of doing and how senators can be the equal of statesmen in any White House, you know? And that we should strive to be that way and we should want to work together to make progress on our country's problems."

The story of that dramatic night is just one of many in McCain's new memoir, "The Restless Wave," published by Simon & Schuster (a division of CBS). Covering the last ten years, the book details his historic presidential campaign against Barack Obama, as well as his disagreements with President Obama, and President Donald Trump, about America's place in the world.

Co-written by Salter, it's their seventh collaboration.

The title, Salter says, comes from the Navy hymn. "He's a very restless man, as anyone who knows him or has covered him knows. And only God could slow him down. And that's [why] he thought that was an appropriate title."

As McCain writes (and as he's heard in the book's audio edition):

"I don't know how much longer I'll be here. Maybe I'll have another five years. Maybe with the advances in oncology, they'll find new treatments for my cancer that will extend my life.

"Maybe I'll be gone before you hear this," he added.

Reid asked, "Do you think this became a different book as a result of the diagnosis?"

How so? "Well. I don't really want to say it's a last testament, 'cause he's fighting hard on sticking around for a while. But he did want to tell Americans how much this country meant to him before he was gone, and how much he thinks this country means to the world."

The book incorporates key themes from some of McCain's recent speeches, including one in Philadelphia last October, at the National Constitution Center, that many saw as a direct swipe at President Trump.

"To fear the world we have organized and led for three quarters of a century, to abandon the ideals we have advanced around the globe, to refuse the obligations of international leadership, and our duty to remain the last, best hope of Earth, for the sake of some half-baked, spurious nationalism cooked up by people who would rather find scapegoats than solve problems, is as unpatriotic as an attachment to any other tired dogma of the past that Americans consigned to the ash heap of history."

Salter said, "He didn't want to turn this into a personal attack on Donald Trump, and I don't think it really is. But it does take strong exception with some of the president's views because they are in great contrast to his own."

"If John McCain could sit down and try to change Donald Trump's mind on one issue, what would it be?" asked Reid.

"On the importance of American leadership in the world," Salter replied. "The world order that's existed for 75 years is worth maintaining. It has made us powerful and wealthy, and it has freed people from tyranny and poverty more so than at any other time in history."

McCain also criticizes the way in which many Americans have walled themselves off from those who disagree with them, writing about his friendships with Hillary Clinton, Joe Biden and Ted Kennedy.

"He always seemed to have as many good friends on the Democratic side as on the Republican side," Reid said.

"He does. That's really one of the main messages he wanted this book to convey to the American people: Don't assume that if someone votes differently than you, that they don't deserve your respect, or your friendship," Salter said.

In fact, one of the book's most stunning revelation has to do with one of McCain's closest friends from across the aisle, expressing regret at not having chosen Senator Joe Lieberman (a Democrat who then became an Independent) as his running mate.

"He does," said Salter. "He does not say, though, as has been interpreted, that he regrets choosing Sarah Palin."

"That was my follow-up question: How can he regret not choosing Joe Lieberman but not regret choosing her?"

"Because he was persuaded not to pick Joe Lieberman. You know, it leaked out that we were considering it, and the advice of his staff -- among them me -- saying, 'You can't do it.'

"He regrets listening to us, I think!" laughed Salter. "But after he made the decision, he never regretted it. And in the book he defends her. And he's never uttered a word, in private or public, of criticism of her."

"Does he sometimes worry that there might have been a direct line from Sarah Palin to Donald Trump?" asked Reid.

"I've never heard him express that."

Last month, McCain underwent another surgery -- this one to treat an infection. While his cancer is terminal, the 81-year-old war hero is still fighting and says he doesn't feel cheated; he feels blessed.

"A fight not joined is a fight not enjoyed, and I wouldn't mind another scrap or two before I'm a memory. Who knows, maybe I'll get another round. And maybe I won't. So be it. I've lived in this wondrous land for most of eight decades, and I've had enough good fights and good company in her service to satisfy even my restless nature.

"Who am I to complain, my friends? I'm the luckiest man on Earth."