The Hidden Story Of The Failed Trump Tower Moscow Deal 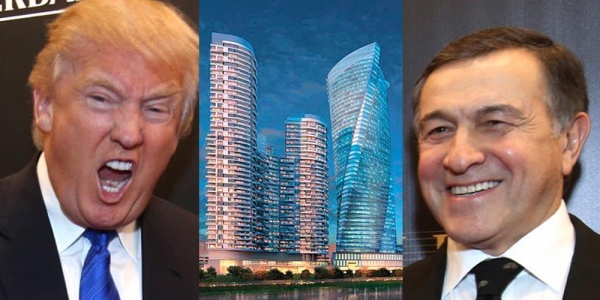 All through the hot summer campaign of 2016, as Donald Trump and his aides dismissed talk of unseemly ties to Moscow, two of his key business partners were working furiously on a secret track: negotiations to build what would have been the tallest building in Europe and an icon of the Trump empire — the Trump World Tower Moscow.

Talks to construct the 100-story building continued even as the presidential candidate alternately bragged about his relationship with Vladimir Putin and rejected suggestions of Russian influence, and as Russian agents worked to sway US public opinion on Trump’s behalf.

While fragments of the Trump Moscow venture have trickled out — most recently in a report last night by Yahoo News — this is the definitive story of the Moscow tower, told from a trove of emails, text messages, congressional testimony, architectural renderings, and other documents obtained exclusively by BuzzFeed News, as well as interviews with key players and investigators. The documents reveal a detailed and plausible plan, well-connected Russian counterparts, and an effort that extended from spearfishing with a Russian developer on a private island to planning for a mid-campaign trip to Moscow for the presidential candidate himself.

The tower — a sheer, glass-encased obelisk situated on a river — would have soared above every other building in Moscow, the architectural drawings show. And the sharply angled skyscraper would have climaxed in a diamond-shaped pinnacle emblazoned with the word “Trump,” putting his name atop the continent’s tallest structure.

Michael Cohen, the president’s embattled personal fixer, and Felix Sater, who helped negotiate deals around the world for Trump, led the effort. Working quietly behind the scenes, they tried to arrange a sit-down between Trump and Putin, the documents show. Those efforts ultimately fizzled. But the audacious venture has been a keen focus of federal investigators trying to determine if the Trump campaign colluded with the Kremlin.

Last month, Senate Intelligence Committee staffers peppered Sater for hours with questions about the Trump Moscow project. Sater testified that Cohen acted as the “intermediary” for Trump Moscow and was eager to see the deal through because he wanted to “score points with Trump.”

Sater also testified that Trump would regularly receive “short updates about the process of the deal.” Cohen has said that he briefed Trump three times on the deal, all before the end of January 2016. Cohen, the White House, and the Trump Organization did not return messages seeking comment.

Special counsel Robert Mueller planned to ask Trump himself about his discussions with Sater and Cohen about the Trump Moscow project, according to the New York Times. One of Mueller’s questions was: “What communication did you have with Michael D. Cohen, Felix Sater, and others, including foreign nationals, about Russian real estate developments during the campaign?” Additionally, Mueller intended to query Trump about any discussions he had during the campaign “regarding any meeting with Mr. Putin.”

Even before the appointment of Mueller as special counsel in May 2017, FBI agents investigating Russia’s interference in the election learned that Cohen was in frequent contact with foreign individuals about Trump Moscow — and that some of these individuals had knowledge of or played a role in 2016 election meddling, according to two FBI agents. The agents declined to name those individuals. Both agents have detailed knowledge about the bureau’s work on the collusion investigation that predated Mueller’s appointment.

In public statements, Cohen has said that he informed Trump the deal was dead in January 2016, but new records show he was still working on it with Sater at least into June. In May, six weeks before the Republican National Convention in Cleveland, Sater asked Cohen when he and Trump would go to Moscow. In a text message, Cohen replied: “MY trip before Cleveland. Trump once he becomes the nominee after the convention.”

Throughout the nine-month effort, Sater, who was born in the Soviet Union and worked for years as an undercover source for US intelligence agencies and the FBI, told Cohen he had connections to top Russian officials and businessmen: Arkady and Boris Rotenberg, brothers who grew up with Putin and were considered his “shadow cabinet”; Andrey Molchanov, a billionaire Russian politician Sater was introduced to by a close personal friend, who proposed building the tower on his property; and a former member of Russia’s military intelligence to whom Sater passed photographs of Cohen’s passport to obtain a visa.

Whatever the significance of the negotiations to the election, the men took measures to keep the plans secret. Text messages often ended with a simple “call me.” They communicated, at times, via Dust, a secure, encrypted messaging application. Sater once warned that they “gotta keep this quiet.”

But now, the story can be told.

The first attempt to build a signature tower in the Russian capital was in 1987, when he visited the Soviet Union to scout locations. In 1996, his company announced another “exploratory trip” that came to nothing. In 2005, he set his sights on an abandoned pencil factory before that deal flickered and failed. In 2013, after hosting the Miss Universe pageant there, Trump tweeted, “TRUMP TOWER-MOSCOW is next.”

His children tried, as well. Donald Trump Jr. visited six times during an 18-month period beginning in 2008, describing it as a “scary place” to do business because of what he saw as inherent corruption in Russia. During a 2006 visit, Donald Jr. was joined by his sister Ivanka and Sater, who said Trump Sr. asked him to chaperone. At the time, Sater was with a development company called Bayrock Group, which helped scout locations and secure financing for the Trump Organization’s licensing deals across the globe.

For Ivanka and Donald Jr., Sater arranged a tour of the Kremlin. Sater, as would be the case over and over in his life, had an inside connection. He phoned an old friend, a Russian billionaire, whom he knew through his Bayrock connections. The billionaire sent a fleet of cars and guards to escort them through the Kremlin, and when a tour guide pointed out Putin’s office, Ivanka Trump asked if she could sit in his chair at an antique desk. One of the guards said, “Are you crazy?”

“I said, ‘What is she going to do, steal a pen?’” Sater recalled. “He let us in. She sat behind the desk, spun in the chair twice, and that was that.”

The tallest tower in Europe

After Trump announced his candidacy in July 2015, Sater saw the opportunity of a lifetime: Why not parlay the presidential run into a business deal?

“I figured, he’s in the news, his name is generating a lot of good press,” Sater told BuzzFeed News. “A lot of Russians weren’t willing to pay a premium licensing fee to put Donald’s name on their building. Now maybe they would be.”

The first step was to get the Trump Organization to sign on, so Sater arranged a meeting sometime in September 2015 with Cohen in Manhattan. The two men were old friends who had hung out as teenagers in Brooklyn. Their paths intersected again in the 2000s at Trump Tower, where Sater was an adviser and Cohen later became one of Trump’s attorneys. (Sater had once occupied the same office, three doors down from Trump, that Cohen used in Trump Tower.)

The plan was fairly simple. Trump no longer built towers, but he licensed his name and expertise to give real estate projects an air of luxury. These licensing deals were especially lucrative for the Trump Organization, pulling in millions in fees and, often, a cut of the sales. At the meeting in late September, Sater said he agreed to line up the developer and the financing; Cohen would get Trump to sign on the dotted line.

The building, originally called Trump World Tower Moscow, was supposed to be the tallest in Europe at well over 100 stories. Sater said he intended to negotiate an even split between himself and the Trump Organization: as much as $100 million or more, which would have amounted to 30% of the sales. “But first I needed to get more meat on the bones and show the Trump Organization that they needed me,” he told BuzzFeed News.

Sater used a network of contacts from his days in both business and intelligence to line up potential suitors. On Oct. 9, he emailed Cohen to say he planned to meet with Molchanov, the billionaire developer, to try to persuade him to provide the land on which to build Trump Moscow. Molchanov did not return a message seeking comment.

On Oct. 12, he again emailed Cohen. Their surrogates in Moscow would be meeting with Putin and a “top deputy” just two days later, and they had financing: VTB Bank President and Chairman Andrey Kostin was on board to fund the project, Sater said in an email.

The bank was a dicey choice. VTB was under US sanctions at the time, with American citizens and companies forbidden to do business with it. Asked by congressional investigators if he knew the bank was blacklisted, Sater responded: “Of course. I wasn’t seeking funding, the local development partner would have. Trump Organization never gets financing from local partners.”

“Mr. Kostin or any other VTB Group’s senior representatives never held any negotiations on any matter relating to the construction of the Trump Tower," a VTB spokesperson said in a statement. "We’d like to stress that no VTB Group subsidiary ever had any dealings with Mr. Trump, his representatives or any companies affiliated with him.”