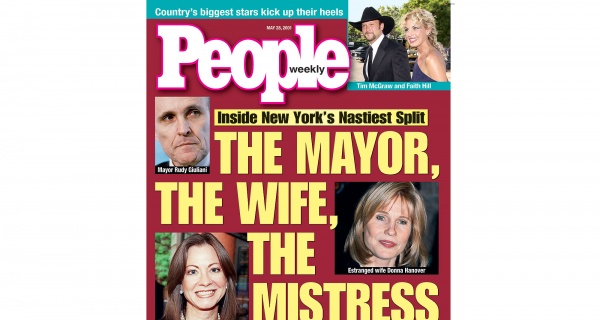 Editor’s note: Rudy Giuliani confirmed his split from third wife Judith to the New York Post on Wednesday. Now, take a look back at the fraught early days of their relationship, when the then-New York City mayor was still married to his second wife, Donna Hanover, in this 2001 PEOPLE cover story.

Mother’s Day dawned bright and sunny in Manhattan, and Donna Hanover had plans. First up, breakfast in bed: an egg-white omelette and a fruit salad of strawberries, cantaloupe and pineapple delivered by Caroline, 11, Hanover’s daughter with her estranged husband, New York City Mayor Rudolph Giuliani. After attending Catholic mass at a neighborhood church with Caroline and her brother Andrew, 15 (but without the mayor, who was delivering a gift of a pink sweater to his own 91-year-old mother, Helen, at her apartment nearby), the three headed to The Bronx to watch the Yankees lose to the Baltimore Orioles, 10-5, in 11 innings. Mom and the kids capped the day with a dinner of pasta and salad back home at Gracie Mansion, the 200-year-old riverside mayoral residence that Hanover, Giuliani and the children still share.

There were gifts too. Caroline presented her mother with a cosmetics case. Andrew gave her hand lotion. And across town Giuliani’s divorce lawyer Raoul Felder was preparing his own Mother’s Day greeting. In the midst of the nastiest flare-up in the Giulianis’ yearlong divorce fight, Felder showed that he cared enough to send the very worst.

“She’s howling like a stuck pig,” Felder told the New York Daily News, referring to Hanover’s decision to remain at Gracie Mansion while seeking a court order to keep her husband’s very public girlfriend, Judi Nathan, out. “She reminds me of the little kid who murders his parents and complains he’s an orphan.”

Felder’s fusillade marked the latest low point in the bitter domestic drama involving the combative Giuliani, 57, Hanover, 51, and Giuliani’s “very good friend,” Nathan, 46, his companion for the past year. The story line has included plot twists worthy of the operas Giuliani so loves: revelations of the mayor’s prostate cancer; his decision not to run for the U.S. Senate against Hillary Clinton; his wife’s public accusations of infidelity; and his matter-of-fact squiring of Nathan around town as de facto first lady.

Not surprisingly, the latest showdown involves that most cherished New York City commodity: real estate. On May 3, fed up with reports that Nathan was attending public functions at Gracie Mansion, Hanover asked a Manhattan supreme court judge to bar her husband’s “paramour” from the mayoral home. Nathan’s visits, she declared in court papers, were an invasion of her intimate private space and should be stopped.

Felder, whose outrage is available by the hour, seemed incensed that Hanover’s sealed request had leaked to the press. So when Judge Judith Gische refused to grant his request for a gag order on the proceedings, he decided to make up ground. “[Hanover] will have to be dragged from the chain of the chandeliers in Gracie Mansion by the next mayor,” Felder said outside Manhattan supreme court on May 11, later telling PEOPLE, “They’ll have to take her biting, scratching and clawing from the premises.” Catching his breath, he branded her as a career-obsessed uninterested mother who “doesn’t care what happens to the children” and was clinging to a dead marriage. “She’s refused,” he said, “to let people move on.”

In useful counterpoint to Felder’s overheated rhetoric were tales sympathetic to the mayor leaked to the feisty New York City tabloids. Among them: how Giuliani—banished to one of the mansion’s tiny guest rooms while his wife occupies the two-room master suite—vomited through the night after drug and radiation treatments for his prostate cancer last fall and winter and was left to cope alone. What’s more, Felder says, Hanover refused her ex’s request to switch rooms (his is barely big enough for a bed) and regularly woke him at 5 a.m. by exercising in a room above. Most intimate of all is team Giuliani’s startling revelation—supported by doctors—that hormone treatments, including the drug lupron, and radiation have left the mayor impotent (temporarily, he hopes) and so lacking in testosterone that he and Nathan cannot enjoy their relationship to the fullest.

All this should be enough to make the most hardened subway straphanger scream, “Enough already!” But lest the rest of the country miss out, David Letterman made the affair a national joke. “Mayor Giuliani’s wife has banned his girlfriend from their home,” the Late Show host quipped on May 9. “Hillary Clinton said, ‘You could do that?’ ” Columnists took sides, with the The New York Times’ Maureen Dowd urging Hanover to leave (“It’s time for her to say ‘Good night, Gracie Mansion’ “). The New York Post‘s Linda Stasi told Giuliani, “You want out, pal? Then you get out.” And the News’ Pete Hamill suggested that both should vacate the premises. Sums up former New York City Mayor Ed Koch: “It’s the craziest thing I’ve ever seen. It’s all anyone is talking about.”

It’s hard to imagine Felder, a canny celebrity lawyer who has represented the exes of Mick Jagger, Liz Taylor and Anthony Quinn, talking at all without, at the very least, Giuliani’s tacit approval. But you won’t hear the mayor say that. “There shouldn’t be harsh words about [Hanover]. There shouldn’t be harsh words about me,” Giuliani told reporters on May 14 during a trip to Milwaukee. Koch, for one, isn’t buying. “Whatever his lawyer is saying, Rudy doesn’t disagree,” he says. “So, in effect, he has authorized it.”

Through it all Hanover has remained mum and kept her lawyers on a relatively tight leash. Still, her attorney Victor Kovner calls Felder’s comments” ludicrous, baseless and embarrassing to both him and Giuliani.” Everyone who knows the first lady, he adds, “knows that Donna Hanover is an extremely caring person and an excellent mother dedicated to her children.” Despite the onslaught, says Kovner, Hanover “is holding up well.” As for the children, who attend private schools in Manhattan, “the hateful and scurrilous charges undoubtedly are reaching them,” says a family friend.

So how did it all come to this? Six weeks after they met on a blind date in 1982, Giuliani and Hanover were so wildly in love that he proposed and she accepted. Within three months she had quit her job as a reporter with the NBC affiliate in Miami and moved to Washington, D.C., where he was an associate attorney general in the Reagan Administration’s Justice Department. Their April 1984 wedding was the second for both but seemed blessed. “It was a nice, generally easy relationship,” Hanover’s friend Reese Schonfeld told PEOPLE last year. “I never heard a harsh word.”

But by 1995 things had changed. That September New York Magazine linked Giuliani to Cristyne Lategano-Nicholas, then his communications director. Both Giuliani and Lategano-Nicholas, now 36, energetically denied any inappropriate behavior. Still, it was clear to friends that Giuliani’s marriage had frosted over. “There was ice, no question about that,” says Hanover’s onetime boss, former WPIX-TV news director John Corporon, who made the mistake of introducing Hanover—who uses the surname of her first husband, Stanley Hanover—as Donna Giuliani in 1996. “She gave me a stare and said, ‘Donna Hanover.’ ” In the years that followed, Hanover was absent from virtually all mayoral functions, throwing herself into an acting career with small roles in films including The People vs. Larry Flynt and Ransom and guest spots on TV’s Ally McBeal and Law & Order.

Then, on May 10 last year, Giuliani blindsided her by announcing without warning, at a press conference, that their 16-year marriage had come to an end. At the same time he addressed his relationship with Nathan, the managing director of Changing Our World, a company that provides business services to charities. Diagnosed with prostate cancer days earlier and facing Hillary Clinton in his all-but-announced bid for the Senate, Giuliani said of Nathan: “I’m going to need her now more than maybe I did before.”

A registered nurse who grew up in Hazleton, Pa., Nathan had moved to New York City from California with her daughter Whitney, 16, after a bitter divorce from millionaire businessman Bruce Nathan, 51, in 1992. Three years later she moved in with psychologist Manos Zacharioudakis, 37. As he recalls it, their relationship was already fading when Nathan met Giuliani at a Manhattan restaurant in early 1999. “She was all excited,” Zacharioudakis says. “He invited her over with her friend. They joined him at his table, and a few weeks later she got invited to Gracie Mansion.”

Nathan split with Zacharioudakis soon afterward and by March the next year was accompanying the mayor to civic functions, including the St. Patrick’s Day Parade. She and Giuliani also became fixtures at his favorite haunts, Da Nico in Little Italy and Osso Buco, near Nathan’s apartment on the Upper East Side. “They came in once or twice a week and sat on the balcony at a banquette,” reports Osso Buco owner Nino Selimaj. “It’s very romantic. I’ve seen them holding hands. They laugh and talk and seem very happy.”

What Hanover objects to, apparently, is the possibility of such scenes playing out in her own home. Over the past six months, Nathan has been a regular guest at events held in the function rooms and grounds of Gracie Mansion, even acting as hostess at a buffet dinner the mayor held this March for his staff and friends.

If Hanover has her way, those visits will end. The mayor, argues her lawyer Helene Brezinsky, “has flaunted his mistress” in the home he shares with his wife and children. But Felder says Nathan has never met the Giuliani children or visited the mansion’s private quarters. Should Nathan show herself there, Hanover, it seems, is ready to pounce. Dallas businessman Roy Bailey witnessed the first lady’s vigilance after a round of golf with the mayor on April 27. Having showered and changed in Giuliani’s quarters, Bailey says he emerged to find Hanover right outside the door. “I don’t think she was sitting in the hallway knitting,” says Bailey. Adds Felder, with customary bluntness: “Someone has to say to her, ‘Get a life.’ ”

So why doesn’t Hanover just move out? Attorney Kovner, who dismisses the shower tale as “ludicrous,” says his client and Giuliani, who formally filed for divorce last December, agreed to share the mansion “for the sake of the children” until his term expires on Dec. 31. “They don’t agree on much, but there’s no disagreement on that.” (Felder begs to differ.) Besides, the $750,000 Upper East Side apartment the family shared before Giuliani’s election in 1993 is sublet through the end of the year. And considering the price of East Side real estate, public housing may not look so bad: A three-bedroom apartment in the neighborhood sells for about $1 million; renting one could cost $10,000 per month.

Justice Gische may rule any day on whether Nathan should keep clear of Gracie. In the meantime, the besieged Hanover might be wise to heed the advice of one who has been there before. “Keep your head high,” says Ivana Trump, a veteran, if ever there was one, of the dirty New York City divorce. “Let the son of a gun go, and say, ‘I’m going to live my life.’ ”