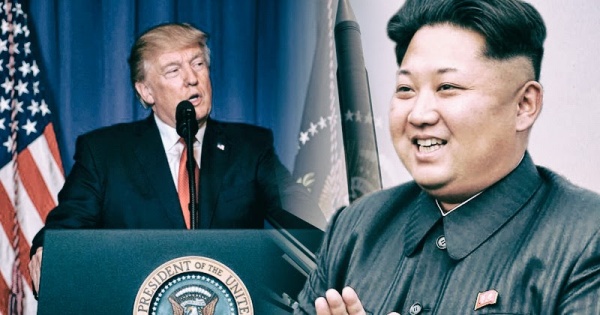 Though a group of Republican governors have joined their colleagues in Congress promoting President Trump for the Nobel Peace Prize, the concept still seems like a pipe dream, particularly after Tuesday. Following a week of violent conflict in the Middle East stemming from Trump's decisions to axe the Iran deal and move the U.S. embassy to Israel to Jerusalem, North Korea released a statement clarifying that it is not willing to abandon its nuclear program just yet.

Though North Korea's recent return of three American detainees and Kim Jong-un's decision to meet with Trump may have offered hope for future relations between the two nations, the dictatorship on Tuesday reminded the world why past administrations have had such a difficult time coming to terms on a peace agreement. In response to a pre-scheduled joint military exercise between the United States and South Korea that began this week, North Korea called off a high-level meeting with South Korea that was supposed to take place Wednesday. In a fax to South Korea’s Unification Ministry, North Korea described the military exercise as a "provocation." The Associated Press reported that in addition to canceling talks with South Korea, North Korea had also threatened to call off the June 12th meeting between President Trump and Kim Jong-un.

A few hours later, Kim Kye Gwan, North Korea’s vice minister of foreign affairs, released a harshly worded statement confirming the report, saying it would “reconsider” meeting with Trump should the U.S. insist they give up their nuclear program in return for economic relief.

The statement takes dead aim at National Security Adviser John Bolton, who is known for his hardline, hawkish approach to foreign policy. "We shed light on the quality of Bolton in the past, and we do not hide our feeling of repugnance toward him," the statement read, referencing recent comments made by Bolton regarding what the U.S. intends to ask of North Korea.

"On the denuclearization side of the program, that means all aspects of their nuclear program," the national security adviser said Sunday on CNN’s State of the Union. "Clearly, the ballistic missiles program, as with Iran, with the intention of being a delivery system for nuclear weapons – that's gotta go. I think we need to look at their chemical and biological weapons programs as well."

Bolton also said that the Trump administration is pursuing "complete, verifiable and irreversible denuclearization” in its talks with North Korea. In the statement released Tuesday, Kim Kye Gwan referenced this line specifically, assuring the United States that North Korea would not be open to the "so-called Libya mode of nuclear abandonment."

"World knows too well that our country is neither Libya nor Iraq which have met miserable fate," the statement read.

In 2003, Libya agreed to give up its nuclear arsenal in an effort to normalize relations with the United States. When the nation found itself in the midst of a civil war in 2011, the U.S. intervened and dictator Muammar Gaddafi was killed. Bolton has been saying for weeks that he would like to take a similar approach to North Korean negotiations. "We have very much in mind the Libya model from 2003, 2004," Bolton said in April on Fox News Sunday.

It shouldn’t come as a surprise that North Korea has objected to Bolton’s bull-headed insistence on taking an all-or-nothing approach to negotiations, as Kim Jong-un’s regime has in the past criticized Libya's decision to trust the United States and dismantle its nuclear program. Why Bolton or anyone else in Trump's administration would expect them to agree to a similar deal is unclear, and now the meeting – as well as any expectation that North Korea might be amenable to disarmament – appears to be in jeopardy.

Though most experts agree that the summit with Kim on June 12th is still likely to happen, the statement from North Korea is a wakeup call for those who may have interpreted the dictatorship's softening stance as a signal that Trump would be able to walk in and convince Kim Jong-un to dismantle his regime's nuclear program. Fortunately for Trump, he's already put in a lot of work hedging in case he returns from Singapore empty handed.

The White House has stayed mostly silent since the news broke, and no press briefing is scheduled for Wednesday. Press Secretary Sarah Huckabee Sanders did, however, make an appearance on Fox & Friends Wednesday morning. "The president is the toughest negotiator around," Sanders said, adding that if the June 12th meeting falls through, "we'll continue the maximum pressure campaign that's ongoing."

The latest piece of fruit Trump has brought back from the negotiating table could be a boost to the Chinese job market. On Sunday, the president inexplicably called for the Department of Commerce to take steps to revive ZTE, a Chinese telecommunications company that violated sanctions against Iran and North Korea, lied to the United States about punishing its employees and has been cited by intelligence officials as a risk to national security. On Tuesday, the Washington Post reported that "appropriately handling the ZTE case to secure global supply chain" was near the top of a list of Chinese trade demands, and it's unclear what motivated the president to make such a massive concession that contradicts several aspects of his administration's position toward China.

It could have something to do with a report from Monday. Just a few days before Trump called for the Department of Commerce to get ZTE "back into business," the Chinese government gave a $500 million loan to a state-owned company to start construction on an Indonesian theme park that would contain Trump properties. When Deputy Press Secretary Raj Shah was pressed to explain how this was not a violation of the Constitution's emoluments clause that prevents the president from accepting gifts from foreign entities, Shah referred reporters to the Trump Organization.