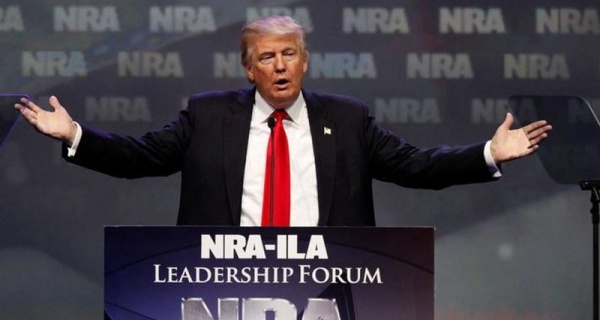 To many, Kanye West is merely an egomaniacal rapper. To others, he’s a powerful black force with T’Challa-like abilities to rally those who worship at the alter of Yeezus. I believe the former, but it sounds like President Donald Trump believes the latter, as he just thanked “Make America great again” Ye for doubling his poll numbers at, of all places, a National Rifle Association convention.

“And by the way, Kanye West must have some power, because you probably saw, I doubled my African-American support numbers,” the president said during the convention Friday, The Hill reports. “I went from 11 to 22 in one week.”

According to The Hill, Trump was referencing a Reuters poll in which his numbers rose some 11 points with African Americans between April 22 and April 29. If true, then this would be around the time that Kanye returned to Twitter and went full Killmonger to Trump’s Ulysses Klaue.

And this, my friends, is the reason that so many people took issue with not only Kanye’s hurtful rhetoric but also his voice and his power to potentially push the needle the wrong way. If the Reuters numbers are correct, then the shift could quite possibly be attributed to West’s tireless efforts to cape for Trump.

But I’m not going to turn this into a think piece about Ye’s uninformed positions and grossly out-of-touch stance. We’ve read too many of those by now, but I think this moment speaks to a bigger problem that Kanye’s influence can have: jumping into politics with no idea what the hell is going on.

Just let all of this sink in: After Trump acknowledged that Kanye’s influence helped raised his poll numbers, he then looked out to the crowd filled with white gun owners as far as the eye could see and said, “Thank you, Kanye, thank you.”