The Real Threat Of Kanye West's Bromance With Trump 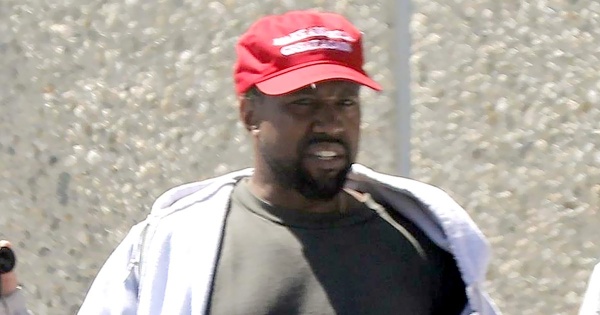 When Kanye West was named one of Time magazine's 100 most influential people in 2010, Elon Musk, who wrote the blurb about the rapper-producer-designer, noted that he "fought for his place in the cultural pantheon with a purpose."

Of all his varied talents, arguably West's most useful one has been his ability to command attention whenever he saw fit. West has always been his own biggest advocate, and after years of telling us how he important he is, he induced many to fall in line with the sentiment. This is a man who has been considered one of the greatest artists of the 21st century, hailed as the most influential man in style history, praised as a game changer in media, and cited by his contemporaries as one who helped shaped their own art. When an artist achieves an almost deity-like presence in culture, they don't have to resort to publicity stunts to command our attention – they'll have it no matter what they do.

Therein lies the flawed reading Kanye West's touting of right-wing commentators like the black but Black Lives Matter–bashing Candace Owens or his declaration of "love" for Donald Trump as mere exercises in attention-whoring. So when I read people dismissing these declarations as such, and going as far to say that we needn't be "outraged" over West, I am further infuriated. It's easy for some – particularly if you are white – to say that an extremely influential black man with a cult-like following aligning himself with a demagogue and racist movement is much ado about nothing, but the rest of us can't shrug off the ramifications so swiftly.

Whether one likes it or not, and no matter if it's right or wrong, Kanye West moves the culture. There is a reason I often jokingly refer to him as a "hip-hop David Koresh." People worship this man and will follow him wherever he goes. The magnitude of his stardom cannot be overstated.

Kanye knows this too, which explains why he once told T magazine, "I'm not a celebrity, I'm an activist. The fact that when I see truth it's really hard for me to sit back and just allow it to happen in front of me on my clock makes me, a lot of times, a bad celebrity."

The conservative movement has never had an advocate as cool as Kanye West and many should be alarmed. Conservatives have long elevated black figures who uphold white patriarchy. It's why Diamond and Silk can net New York Times profiles and appearances before Congress. It's how Katrina Pierson managed to be on national television throughout the 2016 presidential campaign despite displaying very little knowledge about any given political topic. It's how Omarosa Manigault-Newman and Ben Carson scored gigs in the Trump administration despite having no business in either position.

Kanye West doesn't need conservatives to elevate him, but they will benefit from his boosting of their beloved mouthpieces under the guise of promotion of “free thinking.” When Kanye tweeted about Candace Owens, he immediately elevated a black woman who believes racism is nearly extinct (unless she's suing over it) and aggressively tries to undermine the social-justice movements of our time. Conspiracy theorist and village idiot Alex Jones has extended an invitation to Kanye West to appear on InfoWars. Imagine how many people will be exposed to and influenced by such ignorance if that appearance happens.

Then there is the image of Kanye West donning a Make America Great Again hat while declaring that Trump is his "brother." When you wear that hat, you are aligning yourself with the man who wants to deport immigrants who have done nothing but pursue a better life; to bar trans people from serving in our military; to subject gay, bi and queer people to legally protected prejudices of all variances; to subject black people to harsher realities in every facet of our lives; to deny women autonomy over their own bodies. Worse, you are joining the likes of the tiki-torch–clutching white supremacists who stormed Charlottesville in the promotion of what that hat and the man behind it symbolizes.

Kanye West always got too much credit for declaring, during the fallout from Hurricane Katrina, that George W. Bush doesn't care about black people. Frankly, his own history of forging friendships with and apologizing for racists and speaking about racism solely in the context of his fashion interests had already made his true leanings clear, but much as in the case of his "brother" Trump, people tend to need to see something in its extremity before accepting it as real. It remains to be seen how much of Kanye's flock will follow him to the MAGA side of life, but already, some high-profile men are defending his political musings. CyHi the Prynce's defense is to be expected, but Chance the Rapper's interjection was particularly disappointing. "Black people don't have to be Democrats," Chance declared.

They don't, but do they have to align themselves with bigots who wouldn't rent to us, who called for our deaths when we were innocent, mocked our communities on the campaign trail and put a racist in the Department of Justice to enforce "law and order?" On top of this, the man is an admitted serial sexual assaulter.

The inconvenient truth is that there are a number of black people more interested in enjoying the perks of white privilege than in leveling the playing field for us all. Where Kanye West falls on that line has been clear for a while, but it is now undeniable. Conservatives have long wanted to reel in as many black faces as they could to uphold the status quo. With Kanye West going full-on alt-right on us, they've just found their best recruiter ever.