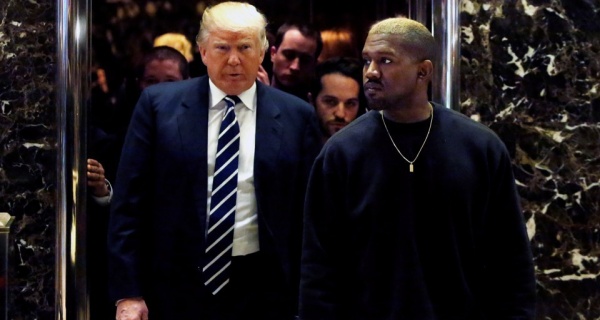 Kanye West doubled down on and then walked back his support of President Donald Trump on Wednesday, saying on Twitter that his wife, Kim Kardashian, had called him and told him to be "clear."

Earlier Wednesday, West seemed to confirm comments by a New York radio host who said West had told him he loved Trump.

"You don't have to agree with trump but the mob can't make me not love him," West tweeted. "We are both dragon energy. He is my brother. I love everyone. I don't agree with everything anyone does. That's what makes us individuals. And we have the right to independent thought."

West continued: "If your friend jumps off the bridge you don't have to do the same. Ye being Ye is a fight for you to be you. For people in my life, the idea of Trump is pretty much a 50 50 split but I don't tell a Hillary supporter not to support Hillary I love Hillary too."

But then, 50 minutes after his first Trump tweet, West tweeted again: "My wife just called me and she wanted me to make this clear to everyone. I don't agree with everything Trump does. I don't agree 100% with anyone but myself."

The tweetstorm came after the radio host Ebro Darden said on Hot 97 radio in New York City on Monday that West told him he loved Trump.

On the show "Ebro in the Morning," Darden recalled a conversation with West in which "he said, 'I do love Donald Trump.'" Darden said he was shocked to hear West double down on the support for Trump but recalled West telling him, "Nobody really showed love for me when I was addicted to opioids and in the hospital."

Before Trump's inauguration West met with him at Trump Tower in December 2016. West pledged his allegiance to Trump at one of his past shows and confessed that he would have voted for him, according to Billboard.

The Trump tweets were in a slew of other tweets about ping-pong, his shoe brand, and Excel spreadsheets.

Watch the Hot 97 interview below: