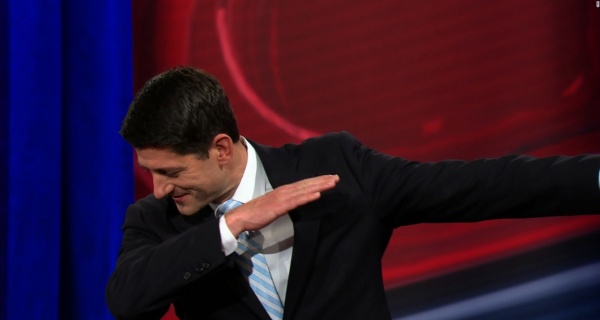 In a surprise announcement Wednesday morning, Speaker of the House Paul Ryan told colleagues he will not seek re-election in November. The decision saves Ryan from a potentially humiliating re-election battle in Wisconsin, where recent special election results had Gov. Scott Walker sounding the alarm about a "Blue Wave." The retirement sends a powerful signal that GOP efforts to hold the House majority could be doomed and Ryan’s decision may set off a new rush of Republican incumbents for the exits.

Here’s what you need to know.

What’s Ryan’s spin on his retirement?

In a press conference Wednesday morning, Ryan said he was retiring at the end of his current term for three reasons.

1) He wants to spend more time with family, particularly his teenagers: "If I am here for one more term, my kids will only have ever known me as a weekend dad," Ryan said. "I just can’t let that happen."

2) He’s accomplished what he came to Washington to do: "I think we’ve achieved a heck of a lot," he said, including "the major reform of our tax code" and the recent larding of the Pentagon.

3) He never wanted this lousy job anyway: "You all know that I did not seek this job. I took it reluctantly," the Speaker said, adding, for emphasis: "I didn’t want this job at first … I really, actually didn’t."

What are the (likely) real reasons?

1) He was facing a bitter re-election battle against Democrat Randy "Iron Stache" Bryce. Ryan’s southern Wisconsin district, stretching from the Milwaukee 'burbs to the state line and greater Chicagoland, is traditionally GOP territory, leaning five points more Republican than the average district. But as 2018 is shaping up, that’s not much of a firewall; by comparison the suburban Pittsburgh district the GOP lost in a special election a month ago was R+11. Democrats had already nationalized the race against Ryan. Bryce, a former Army sergeant who sports a bushy mustache and is an ironworker near Racine, caught fire as a grassroots populist last year. (He’s a union man.) In the first quarter of 2018, his campaign announced on Tuesday, Bryce out-raised the Republican Speaker of the House by $1.75 million.

The Speaker’s team pooh-poohed the idea that Ryan feared Bryce, and leaked an internal poll from March that purported to have him leading the Democrat 55-34. But bowing out now lets Ryan leave on his own terms without the prospect of humiliating defeat. The seat is now very much in play, however, and Bryce is claiming all the credit, tweeting: "WE JUST REPEALED PAUL RYAN."

2) Leading House Republicans really is a lousy job now, and will likely only get lousier. Even if he saved his seat from the Blue Wave, Ryan was likely to surrender his post to a Democratic Speaker, as the GOP retrenched to a minority and rebuilding. In his press conference, Ryan spoke bravely of his party’s prospects in November: "I have every confidence that I’ll be handing this gavel onto the next Republican speaker of the House next year." But even if House Republicans do hold the chamber, their majority will certainly be thinner, and even more difficult to govern.

Ryan became speaker after the Freedom Caucus overthrew John Boehner – essentially by default. He was the one figure who could paper over the divide between establishment Republicans and Tea Party radicals. The same bitter divides still cleave the Republican conference, and the radicals are increasingly restive after the recent spending agreements gave lie to the GOP’s professed principles of fiscal restraint. The smaller the GOP majority, the more leverage the radicals have to engage in the kind of brinkmanship that nearly forced the U.S. into default during Boehner’s reign. Ryan clearly hates herding these cats, and seems happy to pass that burden onto someone – anyone – else.

3) He’s headed for profitable pastures. Ryan’s role in passing the massive Republican tax cut has made him a hero to moneyed interests just about everywhere. After 20 years of serving corporate interests in the public sector, Ryan is now poised to cash in like few elected officials before him.

4) He’s pulling the ripcord before Trump drags the party down. Ryan has presidential ambitions. And there’s great political risk in staying – and being a party to – whatever’s coming next for the Trump administration. Leaving on his own terms gives him a shot of disentangling his political narrative from that of the 45th president.

How will this impact the 2018 midterms?

Ryan’s retirement has the stink of surrender. In addition to being Speaker, Ryan is the House Republicans’ most prodigious fundraiser. As a lame duck, he’s certain to lose pull with party donors. And his refusal to stand and fight for his own re-election is a strong signal that the House may be lost and that the GOP’s last, best hope is to try to hold the Senate. "Not every day you see a Speaker up against a potential loss of majority just say ‘fold,’" tweeted Dave Wasserman, who handicaps the House for the Cook Political Report. "Decision could wreck remaining GOP morale in fight for House." Nate Cohn, the New York Times’ elections guru, tweeted, in a similar vein: "We’re watching the GOP’s once-formidable advantage in the House crumble in real time, retirement by retirement. We could look back and say this was the coup de grace."

Who is next in line?

Once he leaves office, what is Paul Ryan’s legacy?

With little major legislation expected to pass before the election, Ryan’s legacy as Speaker is already cemented. History will remember Ryan, primarily, for surrendering the soul of the GOP to Trump. As Speaker, Ryan stood as a potential counterweight to Trump’s racism, misogyny and mysterious affection toward Vladimir Putin. But Ryan abandoned his moral qualms and his constitutional duty to be a check on the lawlessness of the president, reaching instead for the brass ring of a giant corporate tax cut. Ryan won on that front, passing a bill that will ultimately deliver 83 percent of its benefits to the top 1 percent. But that tax cut exposed the bankruptcy of Ryan’s longtime crusade against deficits. New federal figures project the tax cut will swell the 2020 deficit to $1 trillion, and balloon the debt to $33 trillion by 2028.

As he completes his term, Speaker Ryan leaves America less equal and mired in debt – having tacitly suspended the rule of law for our most dangerous president. Good riddance.