Say It Ain't So: Sara Palin Says She Would Run For Vice-President 'In Heartbeat' 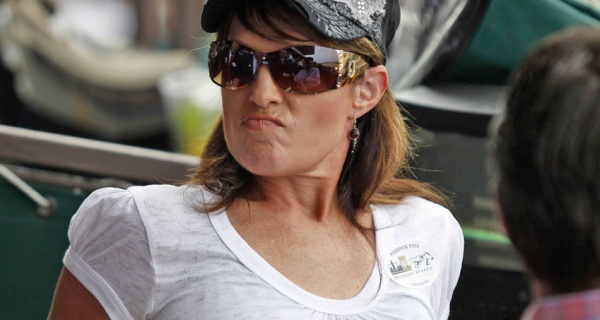 Sarah Palin said she'd consider running for vice president again, after being on the GOP's 2008 ticket.

'Oh yes, I would do it again in a heartbeat,' she told Fox News Channel's Mark Levin in an interview for his new Sunday night show.

Levin had asked the former Alaska governor if she was glad that she joined Sen. John McCain's presidential ticket 10 years ago.

While answering in the affirmative, she admitted that if she did it all over again, she would give the campaign less control over her narrative.

'I will push back harder on some of those who were trying to mold me into something that I was not during the campaign,' Palin answered 'I would've pushed back and gotten more truth out there, but yes.'

Palin was plucked out of relative obscurity to be McCain's running mate.

A newcomer to the national political stage, Palin made some well-publicized missteps and quickly was turned into a caricature, in part because of comedian Tina Fey's impression of the Alaska governor on Saturday Night Live.

To this day, Palin questions why McCain's campaign didn't push back and defend her better.

'I was surprised because in Alaska, as I mentioned, my ratings were very high, things were going well in the court of public opinion, so I was mostly shocked that the campaign itself didn't defend against a lot of the lies that were being spewed during the campaign,' Palin said.

'And then when the narrative was created, they created a character of Sarah Palin and the Palin family,' she continued.

'Once the bell is rung, it's hard to unring,' Palin added.

Eleven months after she was chosen by McCain to be on the GOP ticket, Palin resigned as Alaska governor, leaving the office thanks to brewing ethics investigations, as she was already a household name.

Palin parlayed that into several media gigs – both for Fox News Channel and on reality television – she's written several books, and continues to give speeches.

Most recently, Palin gave the keynote at a GOP fundraiser, which took place at President Trump's Florida estate, Mar-a-Lago.