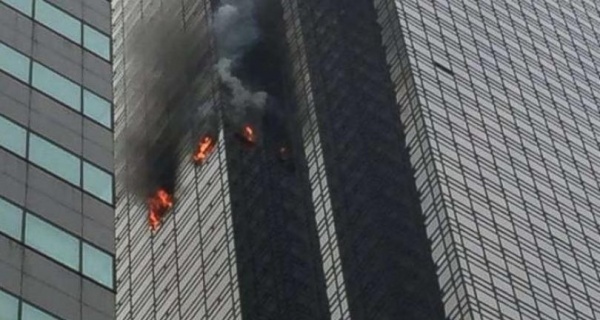 Donald Trump has a complicated history with the life-saving sprinklers the Trump Tower residential quarters lacked during a deadly fire Saturday.

Nearly two decades ago, Trump, then one of the Big Apple’s most prominent real estate moguls, lobbied against Mayor Rudy Giuliani-era legislation that considered whether sprinklers should be installed in all residential buildings after two fatal fires in Brooklyn and Manhattan.

The Brooklyn home had sprinklers but they were turned off at the time of the blaze. The 51-story Manhattan building also had sprinklers, but only on the first 10 floors for commercial tenants.

Trump called city officials like famed Queens politician Archie Spigner, whose council committee compiled the bill, to argue that sprinklers were too expensive — at $4 per square foot — to install throughout an entire building, the New York Times reported at the time.

Early talks for the proposed bill suggested that all residential buildings be required to install sprinklers, which irked developers, including Trump.

The future president backed off on panning the proposal after it was tweaked to grandfather existing buildings — such as Trump Tower — or structures for which building permits had already been filed, such as the Trump World Tower. Construction on the 72-floor building opposite the United Nations began in 1999.

Even then, Trump admittedly failed to see the purpose that sprinklers served in high-rise buildings like his own.

"People feel safer with sprinklers," Trump said, according to the Times. "But the problem with the bill is that it doesn't address the buildings that need sprinklers the most. If you look at the fire deaths in New York, almost all of them are in one- or two-family houses."

Giuliani signed the bill in March of that year, with a provision that required developers to install sprinklers when high-rise rentals undergo renovations.

The fire that erupted inside Trump Tower on Saturday killed art dealer Todd Brassner at his 50th-floor pad, where the law never mandated sprinklers to be equipped.

FDNY Commissioner Daniel Nigro said at a press conference that even though building's residential units lacked sprinklers, the building "stood up quite well."

Trump mirrored Nigro's remarks in a tweet that applauded firefighters before news of the fatality surfaced.

"Fire at Trump Tower is out," Trump tweeted. "Very confined (well built building). Firemen (and women) did a great job. THANK YOU!"

The cause of Brassner’s death was not immediately known.