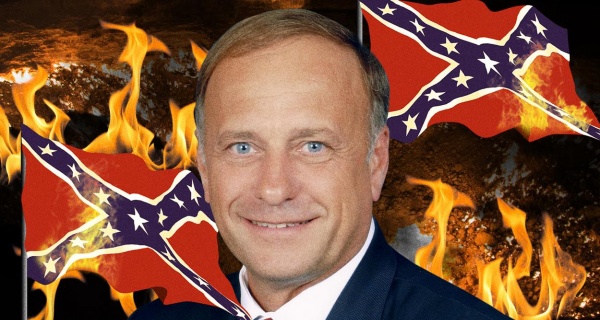 Iowa Republican congressman Steve King, one of the most right-wing members of the House of Representatives, launched a viral tweet over the weekend when he endorsed far-right Dutch politician Geert Wilders—who once said "I hate Islam" and compared the Qur'an to Mein Kampf. King's endorsement of Wilders came in the form of a retweet of a pro-Wilders cartoon, to which King added, well:

Most people interpreted, not wrongly, "our civilization" to mean "white European civilization" and "somebody else's babies" to mean "the children of Muslim migrants." There was an outcry against him, but King didn't back down; discussing the backlash on CNN Monday morning, the congressman said, "I meant exactly what I said."

To put King's tweet in context, let's take a tour through the long history of the Republican congressman's most controversial, aggro, and outright racist moments. Throughout this sprawling epic, keep in mind that Donald Trump once called King "a special guy, a smart person with really the right views on almost everything."

May 2004: King, who had been in Congress since 2003, compared the torture committed at Abu Ghraib to "hazing" in a press release and dismissed it as inconsequential compared to the war crimes committed by America's enemies.

July 2006: King likened undocumented immigrant to livestock while advocating for an electrified fence on the southern border: "We could also electrify this wire with the kind of current that would not kill somebody, but it would simply be a discouragement for them to be fooling around with it. We do that with livestock all the time."

March 2008: While announcing his bid for a fourth term in Congress, King remarked on Barack Obama's candidacy for president—and it got racist pretty quick. After claiming he didn't "want to disparage anyone because of their race, their ethnicity, [or] their name," King said Obama's middle name, Hussein, "has a special meaning to [radical Islamists]." If Obama won, King reasoned that terrorists "will be dancing in the streets because of who his father was." King also made sure to note (emphasis mine):

When you think about the optics of a Barack Obama potentially getting elected president of the United States—I mean, what does this look like to the rest of the world? What does it look like to the world of Islam? I will tell you that, if he is elected president, then the radical Islamists, the al Qaeda, the radical Islamists and their supporters, will be dancing in the streets in greater numbers than they did on September 11 because they will declare victory in this war on terror.

After the Obama campaign asked John McCain to disavow King's statements—which he did—a spokesman for the Iowa congressman offered a non-apology: "John McCain rejects the type of politics that degrades our civics ... and obviously that extends to Congressman King's statement."

August 2008: King calls Obama anti-American in a speech, criticizing him for allegedly not placing his hand over his heart during the National Anthem. "The way to look at the reasons Obama doesn't place his hand over his heart when the National Anthem is playing or wear an American flag pin is primarily because he is not willful or spiteful, but because it just doesn't occur to him because it's not the way he's been raised," the congressman said in a speech in Exira, Iowa. "American patriotism is not imprinted on his mind or in his heart because he wasn't raised as an American." Two months later, he claimed Obama would turn the country into "a totalitarian dictatorship."

November 2010: After the Senate approved the funding for the Pigford II and Cobell settlements —a whopping $1.25 billion awarded to black and American Indian farmers who won a discrimination lawsuit again the Department of Agriculture—King unsurprisingly had something to say. Firstly, although the settlement awarded to the farmers was for the USDA's discriminatory behavior in the 1980s and 1990s, King called them "slavery reparations."

He then accused Obama of favoring the black farmers, saying, "We have a very, very urban senator, Barack Obama, who has decided he's going to run for president, and what does he do? He introduces legislation to create a whole new Pigford claim."

August 2012: During a town-hall meeting, King fueled the rumors that Obama was born in Kenya, saying that while he "found a microfiche there of two newspapers in Hawaii each of which had published the birth of Barack Obama... That doesn't mean there aren't some other explanations on how they might've announced that by telegram from Kenya. The list goes on."

July 2013: In an interview with Newsmax, King said that for every child of an undocumented immigrant who becomes a valedictorian, "There's another 100 out there who weigh 130 pounds and they've got calves the size of cantaloupes because they're hauling 75 pounds of marijuana across the desert." John Boehner, the then House Speaker, called King's comments "deeply offensive and wrong," but the Iowa representative stood by his claims, saying, "My numbers have not been debunked."

July 2014: At an immigration reform rally, King said of Obama, "Now I don't assert where he was born, I will just tell you that we are all certain that he was not raised with an American experience."

August 2014: After the death of Mike Brown and the protests that followed, King said he wasn't concerned about Missouri racially profiling looters "because they all appear to be of a single origin, I should say, a continental origin might be the way to phrase that." He added, "I just reject race-based politics, identity politics. I think we're all God's children. We all should be held to the same standards and the same level of behavior."

October 2014: King warned that immigration is turning the United States into "a third world country."

April 2015: King and Texas House Republican Louie Gohmert hosted Geert Wilders at a breakfast and reception sponsored by the Conservative Opportunity Society. Muslim members of Congress protested this because of Wilder's blatant Islamophobia.

Later that month, in an effort to make god knows what point about immigration, King tweeted that he is "as Hispanic and Latino" as Obama's secretary of housing and urban development, Julian Castro. (King is not Latino.)

June 2016: King claimed it would be "sexist" and "racist" to put Harriet Tubman on the $20 bill. "This is liberal activism on the part of the president that's trying to identify people by categories, and he's divided us on the lines of groups," King explained.

July 2016: King uploaded a YouTube video where he proudly displayed a Confederate flag on his desk. This, some people pointed out, is especially jarring because Iowa supported the Union during the Civil War. Some days later, King went on MSNBC to do what he does best—refuse to back down and argue that no, actually it was people who objected to racism who were actually racists. "This whole 'white people' business does get a little tired," King told Chris Hayes. "I'd ask you to go back through history and figure out where these contributions that have been made by these categories of people that you're talking about—where did any other sub-group of people contribute more to civilization?"

March 2017: That brings us to this weekend when King doubled down on his support of Geert Wilders by tweeting, "Culture and demographics are our destiny. We can't restore our civilization with somebody else's babies." KKK leader and Donald Trump supporter David Duke was quick to endorse King's statement, writing, "GOD BLESS STEVE KING!!!"

In classic King fashion, he went on CNN Monday morning to confirm he meant exactly what he said. To further defend himself, he paraphrased speeches he's given around Europe over the past ten years that express a similar sentiment, saying that he told a group of Germans, "You cannot rebuild your civilization with somebody else's babies. You've got to keep your birth rate up, and that you need to teach your children your values."

When the host asked, "Who is 'somebody else's babies?'" he didn't quite answer the question, explaining, "If you take a picture of what America looks like, you could do it in a football stadium or a basketball court and you see all kinds of different Americans there. We're pretty proud of the different-looking Americans that are still Americans."

After the host pressed him further on the white supremacist undertones of his tweet, King said, "It's the culture, not the blood. If you could go anywhere in the world and adopt these little babies and put them into households that were already assimilated into America, those babies will grow up as American as any other baby."

King complained, "There's been far too much focus on race." But if he really felt that way, wouldn't he shut up about it already?