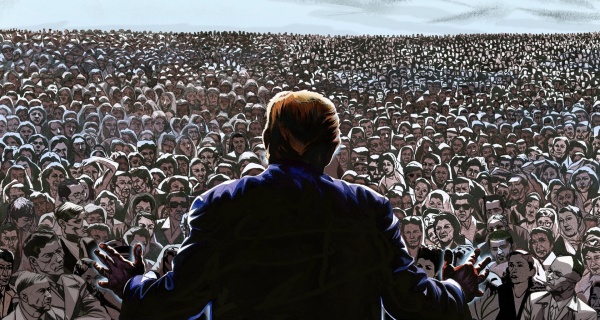 Last July, only six months into the Trump administration’s first term, the head of the Office of Government Ethics resigned in protest.

Walter Shaub didn’t cite a specific reason for leaving, but he was clearly exasperated by an administration that has been plagued by scandals, investigations, and conflicts of interest. “The current situation has made it clear that the ethics program needs to be stronger than it is,” Shaub told NPR at the time. He then joined a nonprofit organization to push for reform from outside government.

Things have gotten worse since he departed.

In addition to special counsel Robert Mueller’s ongoing Russia investigation, the president’s son-in-law, Jared Kushner, is embroiled in several scandals, as are a number of Trump’s Cabinet members. Trump has refused to divest himself of his private business interests, and he’s now mired in a potential cover-up scandal involving Stormy Daniels and $130,000 of hush money, which might have violated campaign finance laws.

But there are good reasons to think that many of Trump’s supporters won’t care about any of this. This, at least, is the argument that Jan-Werner Müller, a political theorist at Princeton, makes in his 2016 book What is Populism?

According to Müller, populists like Trump succeed by pushing a form of tribal politics that elevates an in-group (“the real people”) over an out-group (“the others”). As long as ethical breaches help the in-group, or are believed to do so, they simply won’t matter to committed supporters.

I reached out to Müller to talk about how populists govern, why they’re able to get away with abuses of power, and why protests against them often backfire.

A lightly edited transcript of our conversation follows.

You’ve argued that cronyism and corruption aren’t a problem for certain kinds of populist leaders. Why is that?

This isn’t an empirical finding, so I can’t prove this is the case, but the general idea is that in many populist regimes, what seems so obviously like corruption is, in fact, a strength for these leaders. It’s easy to look at abuses of power and assume that it will hurt the person committing the abuses, but it’s not that simple.

What might look like corruption or cronyism to neutral observers is seen by the supporters of populists as doing the right thing for the right people, the “real people.” This is why the tribal appeal of populism is so crucial. Populist leaders thrive on distinctions between “us” and “them,” between “the people” and “the establishment.”

So when populist or authoritarian leaders like Hungary’s Viktor Orban or Poland’s Andrzej Duda or Turkey’s Recep Tayyip Erdogan seem to be violating norms and imposing anti-democratic measures, their supporters interpret these moves as necessary for their survival. It might be illegal or unusual or extreme, but as long as it’s being done for the in-group, supporters aren’t bothered by it.

One possibility is that supporters of populists simply don’t see a lot of these things as acts of corruption. It’s just their guy or their leader doing what he has to do in a broken system. Another possibility is that because we live in a highly fragmented media landscape, people simply don’t know what’s going on. So it’s not that people are condoning corruption; it’s that scandals never really make it into the news that people actually watch or read.

How do you see this playing out in the context of the US today?

In the case of Trump, a lot of supporters probably feel like they were warned beforehand. Trump told them that this was a special interests government, that the system was rigged and corrupt and that he knew how to manage it. He can say, “Look, I told you that I was a norm breaker, so you shouldn’t be surprised that I’m breaking norms.”

As long as they feel like he’s doing their bidding, and as long as he can point to the bigger economic picture and say that things are going well, he probably thinks he can get away with it.

I’m just speculating here — we can’t say for sure what’s going on or why a significant number of people aren’t upset by Trump’s excesses — but I think it’s worth considering these possibilities.

Does the recent history of populists in Europe and South America and elsewhere show that these leaders don’t pay a political price for their corruption?

So far, it’s not clear that any of the contemporary populists that we’ve mentioned here have paid a significant price.

I think there are likely a number of factors contributing to this. Sometimes the arguments you hear from populists are pretty explicit. They say, “Look, everyone steals, and we steal as well. But we don’t steal as much as the other guys, and we promise to deliver better results.” This is basically the language that’s being used by Orban in Hungary right now.

This doesn’t mean that nothing can be done about this, or that this sort of anti-democratic behavior can go unchecked forever. But I think it does show pretty clearly that we shouldn’t assume that exposing corruption or shady dealings is automatically going to translate into these political actors paying a price at the polls.

There are a lot of concerns right now about corruption and shady dealings in the Trump White House. It’s alarming, and very much in line with what we’re seeing elsewhere in the world. How should citizens respond to this?

I think people need to be careful about how they choose to exercise their outrage. On the one hand, there are objections to specific policies, like the abolition of the Affordable Care Act, but this is the normal stuff of politics. You might hate that Trump is trying to kill ACA, but this isn’t some horribly authoritarian measure; it’s just the sort of thing you’d expect to happen with a Republican in power.

We have to make clear distinctions between normal politics and actions we consider out of bounds. Which is to say, we have to identify red lines and basic constitutional boundaries and be very clear about violations of these things. The danger in protesting everything with the same amount of outrage is that it actually helps populists because it allows them to say to their supporters, “You see, they hate everything we do because they hate us.”

Again, populists are learning from each other in ways we don’t always see. It’s very important to protest, but it’s also important to know that populists are going incorporate protests into their own culture war narrative. It’s why Steve Bannon has said that the “resistance is our friend” — he knows how useful it can be. This doesn’t mean people shouldn’t protest, but it does mean that they have to think a couple steps ahead in terms of how they’re going to make the protest work for them and not for the people they’re protesting.