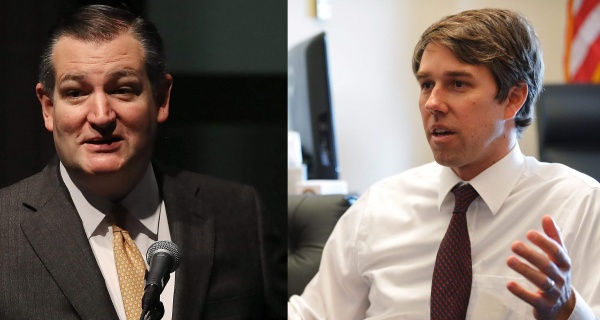 S. Rep. Beto O’Rourke, D-El Paso, raised over $6.7 million for his U.S. Senate bid in the first quarter of 2018, according to his campaign, a staggering number that poses a new category of threat to Republican incumbent Ted Cruz.

The haul is easily O’Rourke’s biggest fundraising quarter yet, more than double his next-closest total for a three-month period. It also is more than any Democratic Senate candidate nationwide took in last quarter, O’Rourke’s campaign said.

Cruz has not released his first-quarter fundraising numbers yet, but O’Rourke’s $6.7 million total is on a different level than his previous hauls, which ranged from $1.7 million to $2.4 million. Those alone were good enough to outraise Cruz for three of the last four reporting periods.

Furthermore, the $6.7 million total came from more than 141,000 contributions — another record-busting number for O’Rourke.

“Campaigning in a grassroots fashion while raising more than $6.7 million from 141,000 contributions, we are the story of a campaign powered by people who are standing up to special interests, proving that we are more than a match and making it clear that Texans are willing to do exactly what our state and country need of us at this critical time,” O’Rourke said in a statement.

O’Rourke’s campaign released the fundraising statistics Tuesday morning ahead of the April 15 deadline to report it to the Federal Election Commission. Cruz has not offered any numbers for the full quarter, though he disclosed raising $803,000 through the first 45 days of the year — a fraction of O’Rourke’s $2.3 million for the same timeframe.

On Tuesday morning, O’Rourke’s team did not volunteer its cash-on-hand figure, but the $6.7 million raised is likely to go a long way toward closing his deficit with Cruz in money to spend. As of mid-February, O’Rourke had $4.9 million in the bank to Cruz’s $6 million.

O’Rourke unveiled the $6.7 million figure on the second day of a three-day, 12-city trip by Cruz to mark the official start of his re-election campaign. O’Rourke is also hitting the road — he plans to hold town halls in 15 cities over the next six days.