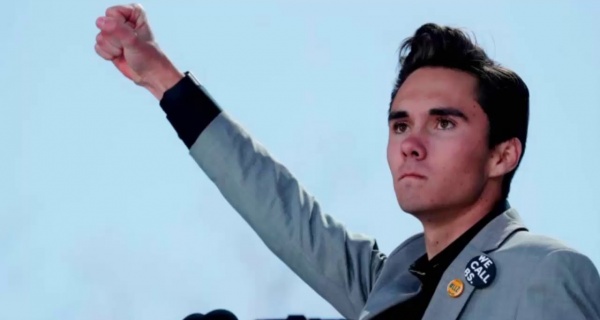 "This kid’s not scared. He’s not scared of the NRA. He’s not intimidated and scared by Laura Ingraham … Half the Republican party is hiding under the table, under their bed. They’re so scared … Not these kids, though” ~ Steve Schmidt

In an appearance on the MSNBC program Deadline White House, Republican strategist Steve Schmidt spoke about what it took to eke out an apology from Fox News host and longtime conservative radio personality Laura Ingraham; namely, fearlessness.

And he called out the Republican Party in general and Speaker of the House Paul Ryan in particular for lacking it.

Nicole Wallace: “Steve Schmidt, I want to you button this whole thing up. You brought us to being in business with Laura Ingraham. I want you to button up that conversation, but also bring us back to your thoughts on David Hogg and what he achieved today that you and I work for multiple politicians who were attacked by Laura Ingraham and they never eked out an apology from her.”

Steve Schmidt: “No, that’s right. John Heilman talked a minute ago about fear and we think about politics today, we think particularly about the Republican majority and America’s greatest scared rabbit Paul Ryan and we look at all these Republican members that are scared to death, scared to death of Fox News, of Laura Ingraham, of Rush Limbaugh and what you see in this young man’s quality of character, fearlessness.”

-Maybe that’s what happens after you’ve been down range of an AR-15 that kills your classmates and comes close to killing you. You lose all fear because this kid is not scared. He’s not scared of the NRA. He’s not intimidated and scared by Laura Ingraham. Laura Ingraham huffs and puffs. You have half the Republican party hiding under the table. Half of them are hiding under their bed. they’re so scared. So timid, so skittish, not these kids, though.-

“And I think that it’s going to be definitional to the political debate that we see play out between November of 2018 when I think Trumpism will be roundly repudiated in the next Presidential Election in 2020. But it’s such a contrast, these kids, to the elected officials in the republican party.”

On Wednesday night, after 54-year-old Laura Ingraham mocked him on Twitter, saying 17-year old David Hogg was “whining” about his college application process, Hogg called for a boycott of her program sponsors on social media under the hashtag #BoycottIngrahamAdverts.

By Thursday afternoon, 3 of the main advertisers cited in the call for a boycott—Nutrish, TripAdvisor, and Wayfair—made the decision to end their relationship with Laura Ingraham.

“As a company, we support open dialogue and debate on issues.”

-However, the decision of an adult to personally criticize a high school student who has lost his classmates in an unspeakable tragedy is not consistent with our values. We do not plan to continue advertising on this particular program.”-

After being dropped by several advertisers and under fear of losing even more, Ingraham chose to offer an apology “in the spirit of Holy Week.”

In the Deadline White House segment, Wallace and Schmidt both remarked that after years of Ingraham saying hateful and damaging things against members of both the Democratic and Republican parties, the 54-year-old never once apologized. 17-year old David Hogg achieved the near impossible from “right-wing radio’s High Priestess of Hate.”

However, Hogg responded that an apology designed to save revenue was insufficient. Instead, he urged Ingraham to change her and Fox News’ ways. On Twitter, he posted,

-I 100% agree an apology in an effort just to save your advertisers is not enough. I will only accept your apology only if you denounce the way your network has treated my friends and I in this fight. It’s time to love thy neighbor, not mudsling at children.”-

As of Friday morning, at least 8 advertisers confirmed they were severing ties with Laura Ingraham, once dubbed “Right-Wing Radio’s High Priestess of Hate.”

In his interview on MSNBC, Schmidt also called out Fox News for becoming a “right-wing propaganda machine.”

-It exists in an alternate reality. It spews forth daily a toxin into the American body politic. It purposefully monetizes division in the country. So when you see Fox News hosts routinely now calling for (top official firings and abuse of the Rule of Law and)…the use of completely crazy alternate reality conspiracy theories as justification for all of it, we’ve never seen in any of our lifetimes an American television ostensibly news network do something like that.”-