Paul Ryan Faces A Tough Challenge In His Re-Election Bid 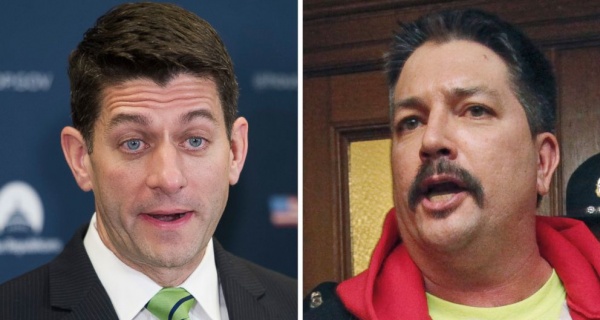 Randy Bryce is a Wisconsin ironworker who has badly lost two state legislative races. He's now running for Congress against one of the country's most powerful Republicans, House Speaker Paul Ryan, who clobbered his last opponent by a margin of more than 2 to 1.

Before laughing, however, consider this: By the end of this week, Bryce will have raised more than $4.5 million, three-quarters of it in contributions of less than $200. The Democratic Congressional Campaign Committee just moved the contest into its "Red to Blue" list of seats it considers competitive in the November midterm elections.

A Bryce victory would be a huge upset. But it's not unthinkable. If surprising Democratic victories in the last year in Alabama, Pennsylvania, Virginia, and Wisconsin presage a blue wave this fall, the most prominent congressional Republican could be in trouble. A Republican wave in 1994 included the defeat of the Democratic House Speaker at the time, Tom Foley of Washington.

While Ryan's southeastern Wisconsin district leans Republican, Barack Obama carried it in the 2008 presidential election and the Democratic Senate candidate, Tammy Baldwin, won it en route to her 2012 victory.

Ryan has represented the district for 10 terms and rarely faces a serious challenge. But he has been squeezed during the presidency of Donald Trump, criticized both for being insufficiently supportive of the president and for being a Trump sycophant. He faces a weak right-wing primary challenge on Aug. 14.

Bryce is a blue-collar liberal, spending most of the last two decades as a worker, some as a union official. He has a wraparound mustache and uses the Twitter handle @IronStache.

He is emphasizing what is usually Ryan's strongest issue, the economy. The Republican tax cut passed in December, the speaker's signature achievement, "gave $1.5 trillion mainly to people who don't need it," Bryce said in an interview late last week in Washington where he was raising money. Now, he said, Ryan is talking about cutting back Medicare, Medicaid and Social Security to pare the expanding deficit. He said it would have been better to spend that $1.5 trillion on infrastructure projects, which he contends would bring back higher paying jobs that have been lost.

Bryce accuses Ryan, who was born in the district and whose ancestors arrived there in the 19th century, of becoming a creature of Washington.

"He spends all his time with lobbyists and billionaires," Bryce said, adding that people in Wisconsin "are becoming aware he has changed."

An Army veteran and cancer survivor, Bryce takes a liberal line on social issues: he opposes most abortion restrictions, favors gay and transgender rights and supports a ban on assault weapons. He sidesteps questions about his allegiance to House Democratic Leader Nancy Pelosi of California, a San Franciscan whom Republicans love to campaign against. Asked whether he would vote for her as speaker, he replied, "I'll see who's running against her."

Ryan studiously ignores Bryce, leaving the counterattack to state and national Republicans. That they take Bryce seriously is evidenced by the growing volume of their barrage. A few months ago, the state party accused Bryce of spending a lot of time "hanging out with Hollywood elites" and called him "Red Carpet Randy."

Republicans also criticized Bryce for buying Twitter followers in 2015, and the National Republican Congressional Committee called him a "phony." (He did buy 1,000 to 1,500 followers, spokesperson Lauren Hitt said, but since then the campaign has added 200,000 more.) On the eve of a visit in February by Senator Bernie Sanders, Wisconsin Republicans put out a statement blasting "Bernie and Bryce, two socialists with a long history of losing."

Democrats acknowledge that it would be hard to beat Ryan even in a blue-wave year. But they say that Bryce will force the speaker, a formidable fundraiser and energetic campaigner, to spend time and energy back home beating back a serious opponent.

@IronStache says he's in the race to win.

"He's never had to face a fight like this before," Bryce said of Ryan. "I'm not doing all this just to come close."