WATCH: Ex-CIA Chief Feels Putin 'May Have Something On Trump' 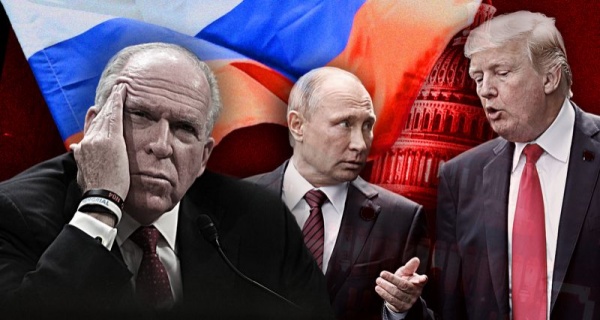 Former CIA Director John Brennan suggested Wednesday that Russia may have compromising information on President Donald Trump and is using it to exercise power over him.

Brennan, who has emerged as one of Trump's fiercest critics over the last year, told host Mika Brzezinski on MSNBC that Trump's congratulatory message to Russian President Vladimir Putin the wake of his reelection this week, which critics viewed as a "sham," suggested that Trump was scared to cross the Russian leader.

"I think he's afraid of the President of Russia," Brennan said on Wednesday. "I think one can speculate as to why, that the Russians may have something on him personally that they could always roll out and make his life more difficult."

"Clearly I think it's important for us to be able to improve relations with Russia," he said. "But the fact that he's had this fawning attitude toward Mr. Putin has not said anything negative about him, continues to say to me that he has something to fear, and has something very serious to fear."

Trump gave his congratulations to Putin during a phone call Tuesday after the Russian president was reelected to another six-year term with more than 75% of the vote. But election observers claimed numerous violations, including ballot stuffing and voter coercion. A noted Russian election monitor claimed that Putin may have received as many as 10 million fraudulent votes.

Trump gave his congratulatory message despite an apparent reminder on his briefing materials prepared by advisers that read, in capital letters, "DO NOT CONGRATULATE."

Brennan's suggestion that Trump is being unduly influenced by Putin echoes uncorroborated claims stemming from the dossier compiled by former British spy Christopher Steele made in his Russia dossier.

"I believe that the Russians would not, they would opt for things to do if they believed that it was in their interest," he said, "and the Russians I think have had long experience with Mr. Trump and may have things that they could expose."