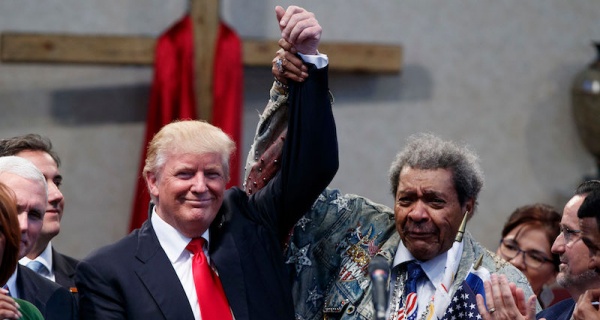 Veteran boxing promoter Don King said an ‘unpredictable’ and ‘uncontrollable’ Donald Trump has thrown everyone into ‘shock and disarray’ when he won the presidency against overwhelming odds.

King, 86, who emerged as a staunch supporter of Trump’s during the presidential campaign, heaped praise on the beleaguered commander-in-chief during a rambling and at times incoherent interview with Fox Business host Charles Payne on Friday.

Sporting a custom acid-washed denim jacket decorated with a portrait of himself and a large button depicting Trump's face, King declared that the president has exceeded his expectations.

No one has carried the type of lightning rod activities since the 13 colonies wrote a letter to King George saying they wanted to discharge so they can be eliminated and independent Americans,’ King said.

While conceding that Trump is not without fault, the boxing legend insisted that he is the only one who can dismantle a corrupt system and replace it with a new one ‘to make America great again.’

‘He’s unpredictable, he’s uncontrollable, he can’t be intimidated or coerced, he can't be bought, and the only people he has to answer to is the American people,’ King said.

‘The lobbyists can’t get him, the super PACs, the pharmaceuticals, the insurers, the Wall Street finance… he has no obligation to any of them, so, therefore, he is working for the benefit of the people.’

King, of Muhammad Ali’s Rumble in the Jungle boxing match fame, further touted what he perceives as Trump’s singular ability to change the status quo in Washington DC.

‘Only one man has the guts, the intestinal fortitude to challenge the system, to say, “We want to remove you and bring about change,”’ King proclaimed.

Looking back on the outcome of the election in 2016, King attributed Trump’s stunning upset victory over Hillary Clinton to ‘the will of the people‘ and some divine intervention.

‘Trump's got as much business being president as...it's just almost impossible,’ he told Payne. ‘That's why everybody is in shock and disarray because he is not what they would have considered to be president.’

Reprising some of his statements from the campaign trial, King defended Trump against claims that he has been sowing racism and divisiveness, by arguing that the nation has long been divided and that Trump's victor has merely brought these sentiments to the surface.