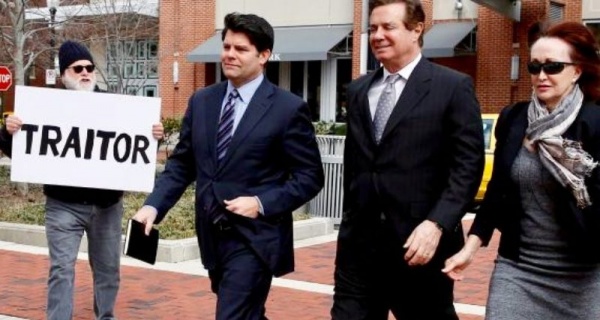 Paul Manafort, the former Trump campaign chairman, runs a significant risk of spending the rest of his life in prison and the evidence against him by special counsel Robert Mueller’s office seems strong, a federal judge declared in an order made public on Tuesday.

U.S. District Judge T.S. Ellis III, who is based in Alexandria, Virginia, and is assigned to a newly filed indictment against Manafort dealing with bank fraud and tax evasion, said the veteran lobbyist and political consultant posed “a substantial risk of flight” because of his assets and the gravity of his legal predicament.

“The defendant is a person of great wealth who has the financial means and international connections to flee and remain at large, as well as every incentive to do so,” Ellis wrote in an order setting the terms of what the judge called “home incarceration” for Manafort, 68, who lives in Alexandria but also has homes in Florida and on Long Island.

“Given the nature of the charges against the defendant and the apparent weight of the evidence against him, defendant faces the very real possibility of spending the rest of his life in prison,” wrote Ellis, an appointee of President Ronald Reagan.

The order, dated Friday, puts Manafort in a “24-hour-a-day lockdown” at his Alexandria condo, except for medical appointments or emergencies, court appearances and meeting with his defense attorneys. Ellis did not require Manafort to post any assets but did order that he pay $10 million if he fails to appear in court.

Manafort’s conditions of release are now subject to approval by two judges, with the result that the once high-flying international consultant is now wearing two bracelets to allow his movements to be tracked by GPS.

Last October, a grand jury in Washington, acting at the request of Mueller’s team, returned an indictment charging Manafort with money laundering and failing to register as a foreign agent in connection with his work for Ukraine. Last month, in Alexandria, Mueller’s team obtained a second indictment of Manafort on 18 tax, bank fraud, and bank fraud conspiracy charges.

Mueller’s office said that it gave Manafort the option of facing a consolidated case in Washington but that he declined, insisting on his right to be charged with the new counts in the district where they were committed.

Under federal sentencing guidelines, Manafort faces up to nearly 20 years in prison in the Washington case and up to about 10 years solely on the tax charges in the Virginia case if convicted, prosecutors said in a court filing last month.

Each of the nine bank fraud or bank fraud conspiracy charges he faces in the Alexandria court carries a maximum sentence of up to 30 years in prison, although judges generally follow the guidelines, which typically call for sentences well below the maximum.

During a hearing on Thursday, Ellis suggested that he was willing to loosen the limits on Manafort’s freedom if he pledged property sufficient to assure his appearance in court.

Manafort made just such an effort again in the Washington court on Monday, filing a sealed motion listing a series of properties he will put up to try to get released from home confinement. U.S. District Judge Amy Berman Jackson, who was appointed by President Barack Obama, has rejected prior offers from Manafort, saying that it was not clear that the available value in the properties after any mortgages amounted to the $10 million figure she is seeking.