WATCH: Evangelical Pastor Says He'll Support Trump Even If He Had Sex With Stormy Daniels 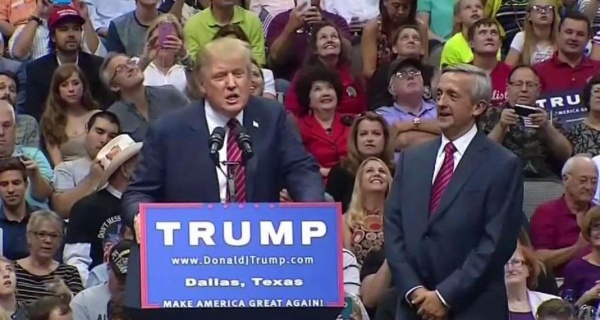 On The Story, Jeffress debated Juan Williams over the latest developments in the Stormy Daniels case. As salacious as it is, it’s a serious matter that goes beyond Trump’s crass infidelity or the even crasser attempts to silence her. There are consequential legal issues at stake for Trump.

But neither the personal nor potentially criminal transgressions seemed to matter a bit to this Baptist preacher.

However, whether this president violated that commandment or not is totally irrelevant to our support of him.

Jeffress gave two reasons for that support: One, “his policies and his strong leadership.” That, of course, opened the door for Jeffress to crow about Trump’s plan to meet with North Korea’s Kim Jong-un (never mind that it’s likely to come to naught). But, OK, we can sort of understand overlooking the personal for the policy. But then Jeffress suggested that supporting Trump is part of being a good Christian.

JEFFRESS: Evangelicals understand the concept of sin and forgiveness. Look, we are all sinners. We all need forgiveness. That forgiveness is available through Christ for anyone to ask. And whether the president needs that forgiveness for this particular allegation, whether he’s asked for it, is between him, his family and his God.

However, forgiving-Christian Jeffress did take a dig at Bill Clinton (who, as far as I know, never paid hush money to Monica Lewinsky).

WILLIAMS: What did Christ do at the temple? He threw out the moneychangers. Pastor, you cannot sell your integrity, your Christian values and say, “Oh, because President Trump is anti-abortion, I’ll support him no matter what.” What happened to the principles? What happened to your love of people of character?

Williams also pointed out that Trump has never publicly asked for forgiveness nor admitted his sin.

Jeffress acknowledged that he’s asked what would make evangelicals “walk away” from Trump. “I’m his friend, I’ll never walk away,” Jeffress said. But, he added, if Trump’s policies changed “or if he were found to be in an adulterous relationship now, that would cause many people a problem.”

That prompted Williams to ask, “What about someone like Rob Porter abusing wives, in the White House, and being excused? That’s ongoing behavior that I don’t think is Christian.”

Oops, time was up. Guest host Sandra Smith suddenly stepped in to end the segment.