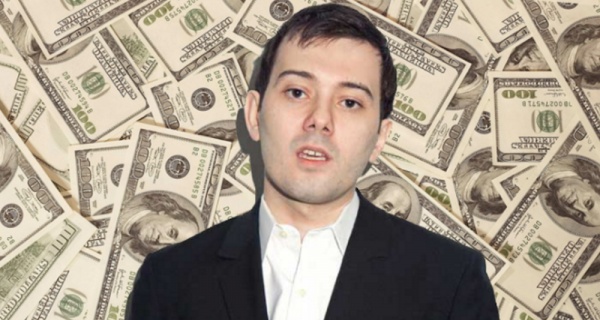 Convicted fraudster Martin Shkreli will have to forfeit $7.36 million to the federal government as part of his upcoming criminal sentence, a judge ruled Monday.

Judge Kiyo Matsumoto said that in order to satisfy that award amount Shkreli — who was said to be completely cash-broke last year by his lawyer — must forfeit his interest in a set of "substitute" assets.

Those assets are: $5 million in cash in an E-Trade brokerage account that previously had secured his release bond; Shkreli's stake in the drug company Vyera Pharmaceuticals; the one-of-a-kind Wu-Tang Clan album "Once Upon a Time in Shaolin"; the Lil' Wayne album "The Carter V"; and a painting by Pablo Picasso.

Privately held Vyera was originally known as Turing Pharmaceuticals, which Shkreli founded in 2015. His lawyer Benjamin Brafman last June said Shkreli's share of Vyera was worth between $30 million and $50 million.

Later in 2015 Shkreli gained widespread public notoriety after Turing purchased the anti-parasite drug Daraprim — which is used to treat a parasitic condition found in some pregnant women, babies and people with HIV — and raised the price by more than 5,000 percent, from $13.50 per pill to $750 per pill.

Shkreli paid a reported $2 million for the Wu-Tang Clan album at an auction in 2015. But questions were raised last year about whether the unique album is actually attributable to the famed hip-hop group — if not, or if the market believes not, the album could end up being worth little or nothing.

The value of the assets to be forfeited will then be applied to satisfying the amount Shkreli has to fork over to the government after "the resolution of any third-party claims" to the assets, the judge said in her ruling Monday.

However, Matsumoto stayed the execution of her order, and the seizure of the substitute assets pending the resolution of Shkreli's planned appeal of his conviction.

In a written opinion, the judge brushed aside arguments by Shkreli's defense team that he should not have to forfeit any money to the government, or that he should only have to give up a relatively small amount.

The forfeiture award is not part of any fine, penalty or restitution the judge might impose.

Shkreli's lawyer, Brafman, did not immediately respond to a request for comment. Brafman previously has argued that Shkreli should not have to forfeit a single penny because there was, in reality, no financial loss from his crimes.

Shkreli was convicted last summer of duping a group of investors in two hedge funds he ran by misleading them about the financial performance of their money in those funds. He also was convicted of fraud in connection with the manipulation of stock shares in another drug company he founded, Retrophin.

Evidence at trial showed that Shkreli used cash and stock from Retrophin to pay back — and then some — investors in his hedge funds for their steep losses.

The new ruling on forfeiture came on the heels of another dose of bad news for Shkreli that Matsumoto delivered last week.

In a prior ruling, the judge had found that the amount of financial loss caused by Shkreli's crimes totaled $10.4 million. Matsumoto refused to give Shkreli credit that would offset that total, saying he only started paying back his defrauded hedge fund investors after they began raising concerns he had ripped them off.

The relatively large sum the judge set for the loss significantly adds to the suggested prison sentence recommended by federal guidelines.

If Matsumoto had agreed with Shkreli's lawyers that there was effectively no loss from his crimes for the purpose of calculating the recommended sentence, the guidelines would recommend he would get less than two years in prison.

But the $10.4 million loss amount determined by the judge means that the guidelines will recommend a maximum sentence of decades in prisons.

However, Matsumoto is not bound by the federal guidelines when she sentences Shkreli.

Last Wednesday, Shkreli's lawyers in a court filing asked the judge to sentence him to just 12 to 18 months in prison.

Federal prosecutors are expected to make their own recommendation on a prison sentence later Monday.

Shkreli had been free on $5 million bond after his conviction in August.

But Matsumoto revoked that bond and ordered him locked up in a Brooklyn federal jail, in September.

The judge's move came after Shkreli in a bizarre Facebook post offered his social media followers $5,000 for each sample of Hillary Clinton's hair they provided to him.