Fighting To Eliminate Gerrymandering One State At A Time 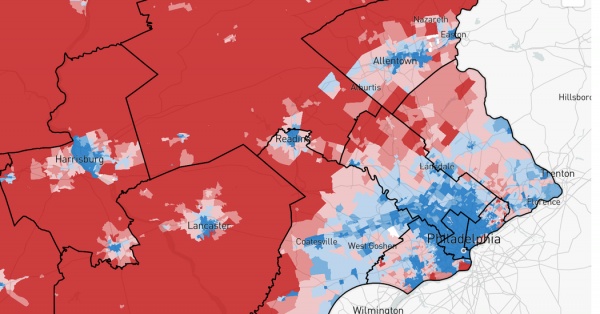 Political alienation plagues our nation, and most of us are correct in feeling that we have little to no impact on the decisions that govern our lives. Research shows that the average American has “near-zero” influence on public policy, while those with wealth have “significant influence.” Unfortunately, this conclusion is based on data from the 1980s and 1990s, and things have only gotten worse since then.

This problem is of increasing concern in the Commonwealth of Pennsylvania, in which campaign finance limits are non-existent and political district lines would be more fairly drawn by an energetic puppy with a sharpie taped to its tail. The state also has no limits on the value of gifts to state legislators. If you are feeling particularly generous—or self-interested—you can take a legislator to the Super Bowl or pay off the student debt of his or her child.

In Pennsylvania, the democratic system isn’t broken. It’s dead. And regardless of political affiliation, Pennsylvanians are correct in having lost faith in our government.

But here’s the deal: Recognizing this sober truth, as depressing and upsetting as it may be, does not preclude reason to hope that things can get better.

Anger and aimlessness lead to helplessness and apathy. But when solutions are coupled with a plan to achieve them, our emotions are transformed into positive, constructive political action. This plan of action is what Pennsylvanians need now.

The two of us, one an author, the other a rabbi, are committed to showing Pennsylvanians that we need not give up on democracy. On February 17, we began a tour across the entire state—from Philadelphia to Erie—and will hold 18 events in 25 days to outline a pathway forward, to direct the corrosive anger felt across the Commonwealth towards constructive, immediate, and long-standing solutions. There will be no political double-talk and no “Harrisburg Heisman” stiff-arm, only meaningful steps to, as the current president would say without meaning it, drain the swamp.

Given that so much is wrong, it will take at least two dozen laws to fix the system. To start the process, though, we narrowed the pool of reforms by weighing what will make the most impact with what is achievable in a state that has a Republican-dominated legislature and a Democratic governor. We narrowed our focus (for now) to two bills.

The first is a gift ban. To think that gifts to politicians are anything short of bribery is an insult to our intelligence. Unlimited gift giving should be made illegal, and doing that is not rocket science. We simply limit what politicians can accept. We are pushing HB39 and SB132, which would make it illegal to accept cars, expensive vacations, and ‘cash gifts’ (yes, cash gifts are currently legal), while still allowing politicians to accept mugs, pens, and other cheaper items.

After a year of lobbying over 240 of our 253 state legislators, we know that this bill would pass floor votes if it made it out of the House and Senate state government committees.

Some wonder why we are tackling this given the recent Pennsylvania Supreme Court ruling that overturned our gerrymandered congressional map. Many conclude that this is the end of the fight. Yet, such thinking couldn’t be further from the truth.

The court ruling only affects the congressional map until the next redistricting cycle. And it does not affect the state legislative map, one also unfairly drawn. And more importantly, relying on the court to regulate politicians’ greed is not an adequate solution. Millions of dollars will continue to be wasted as we litigate maps, and millions more will continue to flood state elections as the two parties vie to win power to rig the district lines.

The only pathway forward is to empower an independent redistricting commission to draw the state and congressional district lines. The bill we are fighting for would do exactly that.

The passage of gerrymandering reform will be difficult. Leaders of both parties—those that benefit from having a seat at the map drawing table—will not give up their control without a major fight.

Moreover, any alteration to the redistricting process in Pennsylvania requires a state constitutional amendment. To do so means passing a bill in two consecutive legislative sessions. As such, time is not on our side. We have until June 30, 2018, to start this process in order to win reform before the 2021 redistricting process. If we fail, we have to wait another 10 years before getting another shot.

Our events across Pennsylvania will be designed to spread awareness about these bills. And, at the end of every event, we will conclude with a plan of action, for public awareness is not enough to win against politicians determined to protect the corrupt status quo. Ultimately, we will ask those in attendance to commit to being in this fight for the long haul, to take the time to organize their friends and family, and most important, form a local “democracy hub,” in which participants will continue the fight long after the event is over.

Our democracy is in peril, yes. But now more than ever we need hope. Not sappy, meaningless hope, but one grounded in a clear-eyed vision forward. We want our journey across Pennsylvania to help foster hope and create a groundswell of democracy reformers that politicians in Harrisburg cannot ignore.