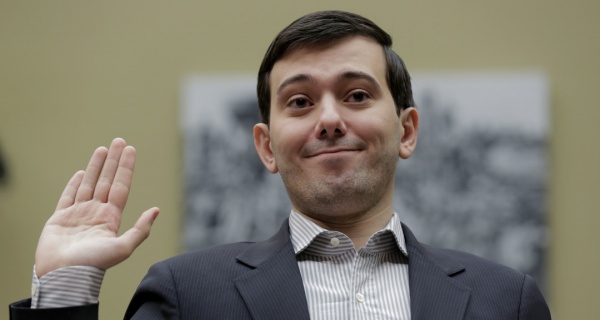 "Pharma bro" fraudster Martin Shkreli's hopes for a light prison sentence were dealt a huge blow Monday as a judge ruled that his crimes caused a loss of $10.4 million.

The ruling by Judge Kiyo Matsumoto means that federal sentencing guidelines will likely call for a prison term of up to a decade or more for Shkreli when she sentences him March 9. She is not bound by those guidelines, however.

Shkreli, 34, and his lawyers have been hoping that he will receive either no time in prison — or perhaps just 16 months or less — for his conviction for securities fraud.

Matsumoto's ruling makes that much less likely. As a rule, the higher the loss amount of a crime, the longer the prison sentence suggested by a calculation of the federal guidelines.

Her ruling relates only to the amount of loss for the purpose of calculating Shkreli's recommended sentence — not in determining how much he should pay the government as part of that sentence.

Also, Monday, Matsumoto in her same ruling rejected a bid by Shkreli's lawyers to reverse his criminal conviction.

At trial, there was testimony and evidence that showed Shkreli had repeatedly lied to investors about details of two hedge funds he ran — which ended up going bust without him telling investors — and then used money and cash from a drug company he later founded to pay them back their money, and then some.

Prosecutors had argued that Shkreli caused between $9 million and more than $20 million in losses. Shkreli's lawyers have said he caused no loss.

In her ruling, the judge dismissed arguments by Shkreli's lawyers that there was no actual loss because Shkreli paid hedge fund investors more than back on their money with cash and stock in the drug company he founded, Retrophin.

Matsumoto noted, "By the time Mr. Shkreli began to funnel money from Retrophin to his MSMB Capital investors, many of those investors, as well as the Securities and Exchange Commission, had detected the fraud."

Because of that, the judge said, she refused to give Shkreli any credit for paying back the investors with assets from Retrophin. That credit would have reduced the amount of the loss for the purposes of sentencing.

Shkreli's lawyer, Benjamin Brafman, in an email statement said, "Disappointed by the ruling but still hopeful that the court will find it in her heart to impose a reasonably lenient sentence on March 9th."

John Coffee, director of the Center on Corporate Governance at Columbia University Law School, told CNBC, "Under the Sentencing Guidelines, the gain or loss from the offense is a principal factor in determining the sentence."

"Such a finding of loss could justify a 10-year sentence — or longer. But federal judges no longer have to follow the guidelines and they are only advisory," Coffee said.

"She has great discretion as to the sentence she imposes; she could recognize that he is a first offender and give him modest time. Or she could place more emphasis on the amount of the loss and his unrepentant attitude," Coffee said.

"This is why most defense counsel instruct their client to appear modest and humble at their trial. Shkreli was the opposite and may pay a high price for his arrogance."

Matsumoto revoked Shkreli's $5 million release bond last September, a month after his conviction, because of troubling Facebook posts he made offering followers $5,000 if they obtained a lock of Hillary Clinton's hair.

Matthew Schwartz, a lawyer not affiliated with the Shkreli case, told CNBC, "In Shkreli's case, if the government is right that the losses are between $9.5 [million] to $25 million, then there will be a 20-level increase to the applicable sentencing guidelines; whereas if Shkreli is right, the loss amount would be zero."

"A 20-level difference in the sentencing guidelines could easily mean a difference of literally decades in prison," said Schwartz, who works at the firm Boies Schiller Flexner. "Of course, the guidelines are just that, and the court is not required to adhere to them."

Schwartz said that as far as he was aware there has been no formal calculation of the guideline range for Shkreli's sentence that is publicly available, "But if I had to guess, I would say that the advisory Sentencing Guidelines range will be at least 108—135 months' imprisonment, and probably more."

Shkreli first came to public notoriety in the summer of 2015 when he created the company then known as Turing Pharmaceuticals, bought a decades-old anti-parasite drug, Daraprim, and promptly hiked the medication's price from $13.50 per pill to $750.

Matsumoto has not yet ruled on the question of the amount of money Shkreli should forfeit to the federal government when he is sentenced.

Prosecutors want Shkreli to fork over $7.36 million. They also want him to set aside assets that include a one-of-a-kind Wu-Tang Clan album and pricey artwork to secure that penalty during the planned appeal of his conviction.