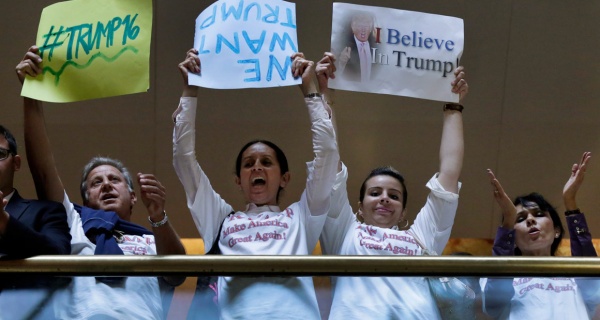 Date Posted: Friday, February 23rd, 2018
It’s incomprehensible to many of us that people could support a president who, in Bernie Sanders’ words, “is compulsively dishonest, who is a bully, who actively represents the interests of the billionaire class, who is anti-science, and who is trying to divide us up based on the color of our skin, our nation of origin, our religion, our gender, or our sexual orientation.”
Based on various trusted sources and a dab of cognitive science, it’s fair to conclude that there are three main reasons for this unlikely phenomenon.
1. Trump’s Followers Believe They’re Better Than Other People
Nationalism, exceptionalism, narcissism, racism. They’re all part of the big picture, although it’s unfair to simply dismiss Trump people as ignorant racists. Many of them are well-educated and wealthy. But well-to-do individuals tend to feel entitled, superior, uninterested in the people they consider beneath them, and less willing to support the needs of society. Thus many wealthy white Americans are just fine with Trump’s disdain for the general population.
Poorer whites also feel superior, in the sense that they’re reluctant to give up their long-time self-assigned position at the top of the racial hierarchy.
Trump and the Republicans don’t seem to care at all about poor people, especially people of color. It’s nearly beyond belief that they’d allow a father to be torn away from his family after living in the U.S. for 30 years; that they’d allow tens of thousands of Americans to sleep outside in subzero weather; or that they’d ignore the women and children being blown up by our bombs in Yemen.
2. They’re Driven by Hatred for Their Perceived Enemies
According to an ancient proverb, the enemy of my enemy is my friend. For many besieged Americans, the friend is Donald Trump, the enemy of his followers’ enemies, based on his belligerent put-downs of so many target groups that have been recklessly blamed for America’s problems. He’s been against a ‘lying’ media, ‘job-stealing’ immigrants, ‘business-stifling’ environmentalists, ‘elites’ like Hillary Clinton who are thought to look down on struggling middle-class whites, and the LGBTQ community and pro-abortion groups, which threaten the religious right’s ‘traditional’ values to a point they consider much worse than Trump’s moral depravity.
Their greatest enemy may be the traditional politician, who has allowed the middle class to falter. Trump is unconventional, different from anyone before him. As long as their president is disrupting the status quo, change is happening, and any change, his supporters believe, is likely to defeat one or more of their enemies.
3. They Refuse to Admit They Were Wrong
In fact, the more they’re proven wrong, the stronger their resolve. This is called cognitive dissonance. It’s common for conservatives to construct their personal beliefs on a moral basis, to adhere to them in the face of any controversy, and if necessary to reshape the evidence to fit these beliefs. Many conservatives continue to fall for Trump’s hyperbole about a “booming” economy and new jobs and better times to come.
Conservatives even tend to believe that inequality is part of the natural order, and that any attempt to change it is senseless. Cognitive dissonance kicks in for them when they are confronted with the overwhelming evidence for a collapsing middle class. Rather than re-evaluating their beliefs, they go to the other extreme and defend the widening fracture in U.S. society as a natural consequence of an imagined meritocracy. Incredibly, according to one poll, in 2014 only 5 percent of the U.S. population believed that the government should be addressing inequality.
So Now What?
In his rebuttal to Donald Trump’s State of the Union address, Rep. Joe Kennedy (D-MA) said, “This administration isn’t just targeting the laws that protect us; they are targeting the very idea that we are all worthy of protection.”
…that we are all worthy of protection. That will only happen with a progressive candidate who believes that a strong society makes successful individuals, not the other way around.