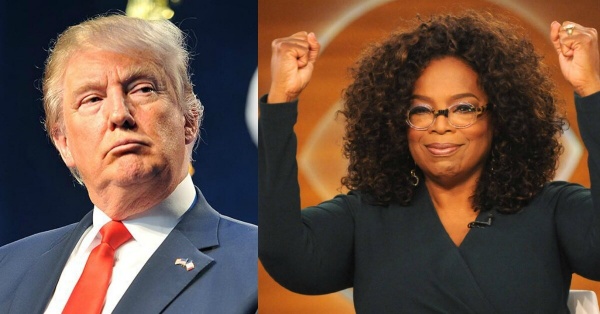 Date Posted: Friday, February 23rd, 2018
Oprah has weighed in on Donald Trump calling her "very insecure" in a recent tweet, following her "60 Minutes" segment about the presidency.
“I woke up and...I don't like giving negativity power, so I just thought, 'What?'" Winfrey told Ellen DeGeneres on her talk show on Thursday.
On Sunday, the "Wrinkle in Time" star appeared on CBS’ “60 Minutes” leading a discussion about the 2016 election with 14 people from Grand Rapids, Mich. Half of the people from the group voted for Trump in the 2016 presidential election, the other half did not. The same group was interviewed on the program last year.
"One year into Donald Trump's presidency, Americans remain divided, often unwilling to listen to what the other side has to say," Winfrey said.
After the special aired, Trump took to Twitter to share his reaction about the segment.
“Just watched a very insecure Oprah Winfrey, who at one point I knew very well, interview a panel of people on 60 Minutes. The questions were biased and slanted, the facts incorrect,” he tweeted, then addressed the rumors of Winfrey's 2020 presidential bid. “Hope Oprah runs so she can be exposed and defeated just like all of the others!”
— Donald J. Trump (@realDonaldTrump) February 19, 2018
Winfrey’s potential run for the presidency was the subject of speculations following her speech at the Golden Globes last month. Her longtime boyfriend Stedman Graham said, “It's up to the people” whether she runs, but added that “she would absolutely do it."
While on Ellen, Oprah admitted to the talk show host that after receiving Trump's comments about her "60 Minutes" special, she said she did go back to double check her facts.
“What I actually really did was I went back and looked at the tape to see if there was any place that, that could be true,” she explained.
She then went on to reveal that she did find something that could have made the interview better.
“I said there’s something missing here from the conversation,” Winfrey started. “When I had asked the question of ‘Do you think, do you care about what other people think about America?’ and they only used the Democratic side. And I said I remembered the guy Matt had said, ‘No, we’re the only people that are worried what other countries are thinking of us.’ And I said, ‘I think you should go back and put that in because it makes it more balanced.’ ”
Winfrey has since denied that she will run for president in 2020  telling CBS’ “60 Minutes Overtime” that God has not yet told her to run for president. “If God actually wanted me to run, wouldn't God kinda tell me? And I haven't heard that."
Trump said last month that if Winfrey runs, he would beat her. “Yeah, I’ll beat Oprah. Oprah would be a lot of fun,” he said, although adding that “I know her very well. I like Oprah. I don’t think she’s going to run.”