The Dating Website For Trump Supporters Is Marred In Controversy 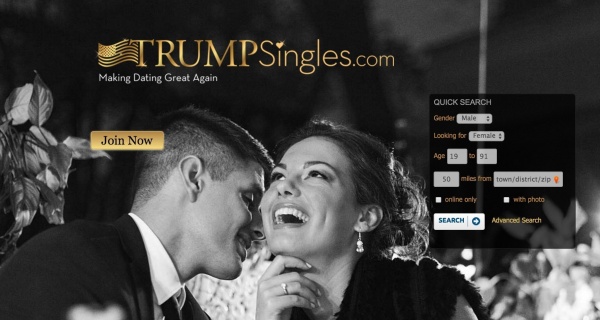 The dating game has become more political than ever. A 2016 Tinder study found 71% of online daters consider political differences to be a dealbreaker.

And now, two online dating sites — Trump Dating and TrumpSingles — have arisen to indulge one side of that growing divide.

The two sites brand themselves as exclusively for supporters of US President Donald Trump, but they're not quite the first of their kind. Politically focused sites catering to Republicans and Democrats seeking love have sprung up in the past. There was even a site for singles who were "feeling the Bern".

And conglomerate IAC — which owns Match.com and a slew of other dating services — caused a stir in 2016 when it locked down the URL "TrumpPeopleMeet.com," though it hasn't used the domain to set up a site yet.

But the language used by one of the two sites has recently sparked controversy.

The Wisconsin Gazette reported that Trump.Dating previously hawked its intent to "deport liberals from your love life," although that boast has since been taken off the front page. In fact, the front page doesn't make much mention of Trump at all — aside from its name and branding.

It does feature a blurb on the polarization of American politics, and bemoans the fact that, "While searching for a potential partner on other dating sites, it's not uncommon to see messages like No Trump supporters or Proud liberal."

Trump Dating also attracted criticism for striking an anti-LGBT tone right off the bat. When you kick off the process of starting a profile, you get two options for labeling yourself — "straight man" or "straight woman."

Yet according to Trump Dating's rather strange drop-down menus, married people are welcome. For a relationship status, the site offers options like "have a significant other," "happily married," and "unhappily married."

The ethnicity options also seemed oddly specific. In addition to the typical categories, the site includes choices like "Scandinavian," "Polynesian," "Eastern European," "Western European," "Mediterranean," and "Eskimo," a term used to label the indigenous people of Alaska, Canada, and Greenland that is considered offensive and inaccurate.

Like many dating sites, Trump Dating also wants to get a sense of how you look. It asks about your eye and hair color, and your body type. The latter section gives you options like "tight and toned," "few extra pounds," "big and beautiful," and "big and handsome."

Once you've set up your profile, you can start to get more specific about your interests and personal details. Interestingly enough, the MAGA-themed site also gives you the option of labeling yourself a "liberal" or a "moderate liberal."

The interests section — which doubles as the "attributes you'd seek in a date" category — includes some fairly standard boxes, like "movies/videos," "wine tasting," "fitness/exercise", and "nightclubs/late night." It also features "military men/women," "country western," "police/firefighters," and "single parents" as check-boxes.

But if you'd like to ask a fellow Trump supporter out for "covfefe," you'll have to drop some cash and upgrade in order to message them.

TrumpSingles, on the other hand, promises to "make dating great again," but doesn't include much messaging on its front page.

The site took forever to load. Once you're in, it asks you if you're searching for "fun," "whatever," "dating", or pursuing a "like-minded friendship."

The dating site boasts an expensive age range — you can hone in on suitors from ages 20 to 92. It also asks you to define your body type as either "slim," "average," "athletic," "a little plump," or "big and lovely."

Both sites were riddled with accounts that used cartoons or stock images as profile photos.