Trump And Playboy Playmate: A Look At Six Facts Learned About This Alleged Affair 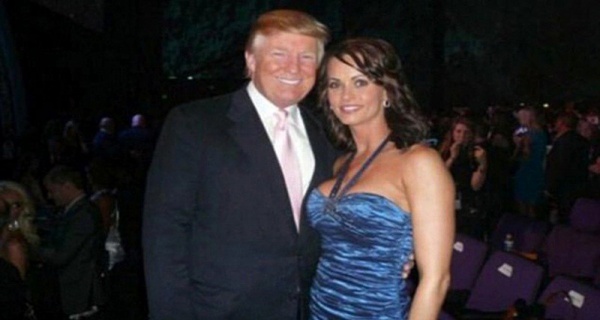 Donald Trump's affair with former Playboy model Karen McDougal was kept out of headlines through an elaborate cover-up, according to claims made in Ronan Farrow's latest New Yorker piece.

The story, published Friday, alleges that American Media, Inc., the publisher of the National Enquirer, took extensive measures to ensure that it had legal control over McDougal's story, especially in the run-up to the 2016 presidential elections. (David Pecker, the CEO, and chairman of A.M.I., once described Trump as a "personal friend").

According to the New Yorker piece, McDougal and Trump first met in June 2006, when the real estate mogul taped an episode of The Apprentice at the Playboy Mansion. After coming onto McDougal and asking for her phone number, Trump allegedly began a nine-month affair with the former Playmate of the Year while married to Melania (their son Barron was just a few months old at the time).

A spokesperson for the White House issued a statement denying the affair in response to the story, saying, "This is an old story that is just more fake news. The President says he never had a relationship with McDougal." A.M.I. issued its own statement, noting that though it had initially expressed interest in McDougal's story, the company ultimately did not run the story "because it did not find it credible."

Here, six allegations about Trump and McDougal's alleged affair and American Media, Inc's involvement in keeping the story under wraps.

The New Yorker has an eight-page, handwritten document by McDougal in its possession.

McDougal's friend, John Crawford, provided the handwritten account of the affair to the publication. In it, McDougal details her interactions with Trump, including one instance wherein he tried to pay her after they had sex. "(He always ordered steak and mashed potatoes – he never drank)," she wrote in one excerpt shared with the publication. "We talked for a couple hours – then, it was 'on'! We got naked and had sex. After we got dressed to leave and he offered me money. I looked at him and felt sad and said, 'No thanks – I'm not that girl. I slept with you because I like you – not for money.' He told me, 'You are special.'"

Trump made sure to leave no paper trail during the course of their affair.

According to McDougal, she would always front the funds for any trips to see him, and he would then send her money to cover the costs. "No paper trails for him," she wrote in the eight-page document. "In fact, every time I flew to meet him, I booked/paid for flight + hotel + he reimbursed me." Among the places, Trump allegedly flew McDougal was to a Lake Tahoe celebrity golf tournament, where she met New Orleans Saints quarterback Drew Brees and golfing legend Tiger Woods. Trump allegedly told McDougal to "stay away from that one, LOL."

Earlier this week, Trump's longtime attorney, Michael Cohen, issued a statement that he had paid Clifford $130,000 out of pocket and that Trump had not been involved in the transaction in any way.

McDougal met members of Trump's family while they were having their affair, and promised her an apartment in New York.

The former Playmate wrote that she attended a January 2007 launch party for Trump's now-defunct liquor brand, Trump Vodka, where she was seated at a table with Kim Kardashian, Trump, Donald Trump, Jr., and Trump, Jr.'s wife, Vanessa. "We took pics together, alone + with his family," she wrote. McDougal also recalled that Trump's son Eric pointed her out when Trump asked him who he thought "was the most beautiful girl here … Mr. T said 'He has great taste' + we laughed!"

McDougal ended their affair in April 2007 but didn't come forward with the story until nearly a decade later.

"She couldn't look at herself in the mirror anymore," Crawford said. McDougal kept the affair under wraps but decided to come forward with her story in 2016 at Crawford's prodding. "She and I were sitting at the house, and I'm watching [Trump] on television," Crawford said. "I said, 'You know if you had a physical relationship with him, that could be worth something about now.' And I looked at her and she had that guilty look on her face." McDougal said she was initially reluctant to speak out but decided to after seeing a former friend posting about the affair on social media.

"I didn't want someone else telling stories and getting all the details wrong," she said.

Crawford and McDougal enlisted the help of an attorney, Keith M. Davidson, to help get the story sold.

Davidson reached out to A.M.I. with the story, and on June 20, 2016, he and McDougal met with Dylan Howard, A.M.I.'s chief content officer. Emails from that time show that A.M.I. didn't initially have much interest in the story, and offered $10,000. By the time Trump won the Republican nomination, however, interest increased and McDougal signed a deal with A.M.I. on August 5, 2016, granting the company exclusive ownership of her account in exchange for $150,000.

After Davidson, Crawford and an intermediary took a 45 percent cut from the deal, however, McDougal was left with just $82,500.

The story never surfaced, but on November 4, 2016, just four days before the election, the Wall Street Journal reported that A.M.I. had paid $150,000 for the exclusive.

Six former A.M.I. employees told Farrow that Pecker was known for making "catch and kill" arrangements for stories he wanted to bury, as the strategy is known in the tabloid industry. "We had stories and we bought them knowing full well they were never going to run," Jerry George, a former A.M.I. senior editor told Farrow. (George had worked at the company for more than 25 years). "Pecker really considered [Trump] a friend," he added. Other former employees alleged that Pecker would occasionally use unflattering, unpublished stories as "leverage" over celebrities to use them for information or pressure them to pose for his magazines. Such celebrities included Arnold Schwarzenegger and Tiger Woods.

In a statement to The New Yorker, A.M.I. denied using the story as leverage over Trump. "The suggestion that A.M.I. holds any influence over the President of the United States, while flattering, is laughable," the statement reads.

McDougal claims A.M.I. thanked her for her loyalty in numerous ways, including offering up the possibility of hosting gigs or health and fitness columns in its publications.

She says Pecker flew her to New York for lunch to thank her personally for not speaking about the Trump affair, and Howard allegedly sent an email a few days later addressing possible plans for her to host A.M.I.'s awards show coverage. Crawford told The New Yorker, "They got worried that she was going to start talking again, and they came running to her."

In a statement to Rolling Stone, a spokesperson for A.M.I. said, "A.M.I. paid Karen McDougal to appear on two covers and write fitness columns, which she has done. Her lunch with A.M.I. executives and her representative was to review the first 16 months of the contract, discuss her documentary, and explore an extension of the partnership. ... It would be great if A.M.I. could do a 'favor' for a sitting President, but sadly, it doesn't have that much power or influence."