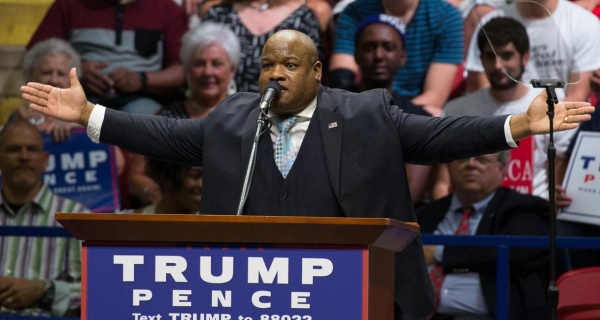 A narrator calls Burns an "emerging force in the conservative movement" and signals that his candidacy will hinge heavily on his close relationship to President Donald Trump.

The pastor from South Carolina joins a crowded field of Republicans and Democrats who hope to succeed Gowdy in representing the Palmetto State in Congress. Gowdy, chairman of the House oversight committee, announced he would not run for re-election this month, adding his name to a growing list of Republican lawmakers leaving Congress during Trump's first term in office.

Burns has yet to present a policy platform but has hewed closely to Trump on immigration and support for law enforcement in the past. And in the aftermath of the deadly shooting in Parkland, Florida, this week, Burns tweeted that the U.S. should federalize security in public schools, likening it to the Transportation Security Administration.

Burns was an early supporter of Trump’s, rising to national prominence as one of his most outspoken African-American defenders during the 2016 election.

He's continued to defend Trump as president, earning tweets of support from him for sparring with cable news hosts and even swatting down spiders that might seek to harm Trump in the Oval Office, something Burns told NBC News he did during a recent gathering at the White House.

Burns was most recently at the White House this week for a reception in honor of Black History Month.

He appeared with Trump at campaign rallies throughout the primaries and general election, especially in South Carolina. Burns also gave a fiery address at the Republican National Convention in Cleveland, advocating that "all lives matter" and leading the convention floor in prayers to give Trump "the words to unite this party, this country, that we together can defeat the liberal Democratic Party."

While much of Burns' TV time has been spent defending the president, he has not been without his own controversies.

In the heat of the 2016 campaign Burns tweeted, then deleted and apologized for a controversial tweet that showed Clinton in blackface with a caption that asserted she used "Black Americans" for votes during election years.

He also came under fire when CNN reported that he had padded his resume, exaggerating his college and military service records. Burns owned up to the embellishments, but blamed media bias at the time for them coming to light.

“It’s a shame that the political insiders and the media choose to attack me because I’m not going to stay silent about Hillary Clinton’s pandering to our community,” he tweeted at the time.

Burns is not first member of Trump's campaign orbit to try to parlay loyal support for Trump into a ticket to Washington.

Last year, Trump aide Alan Cobb lost his bid to succeed Mike Pompeo, who gave up his House seat from Kansas to become CIA director; Trump surrogate Bruce LeVell fell short in his Georgia race for the seat of Tom Price, the former secretary of health and human services; and fired Trump campaign staffer Corey Stewart couldn't best Ed Gillespie for the GOP nomination for governor in Virginia. Stewart, for his part, is running again in 2018 — this time for the Senate.

South Carolina's 4th District will head to the polls in June for the primary, and November for the general election.